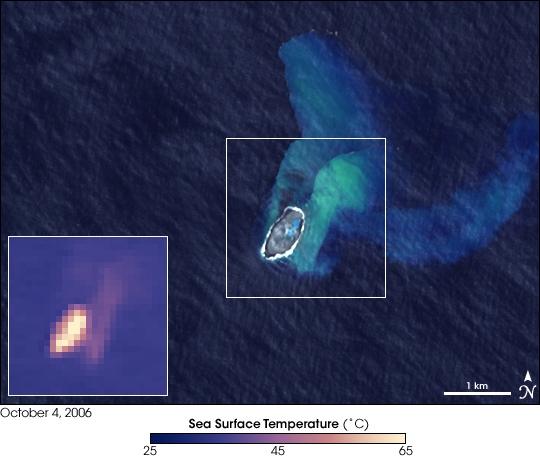 In August 2006, travelers yachting through the Tonga Islands discovered pumice floating on the ocean surface. The pumice resulted from an underwater eruption of the marine volcano Home Reef. Although the pumice eventually floated away, the new volcanic island could still be seen by satellites in the fall of 2006.

On October 4, 2006, the Advanced Spaceborne Thermal Emission and Reflection Radiometer (ASTER) on NASA’s Terra satellite observed the newly emerged Home Reef. This image shows two views of the volcano. The larger image uses a combination of light visible to human eyes and infrared light. In this picture, dark blue indicates relatively clear water, light blue-green indicates water mixed with sediment, and the white ring around the island shows rocky material. The inset image shows temperatures on and around the island, with bright yellow being the warmest and dark purple being the coolest.

Both images indicate a warm plume from the island that moves in a northeasterly direction before splitting in two. The exact origin of this plume is uncertain. It could result from underwater volcanic activity, but it might also result from solar heating of pumice remaining in the area. The island itself sports volcanic lakes, some as warm as 64.7 degrees Celsius (almost 150 degrees Fahrenheit). 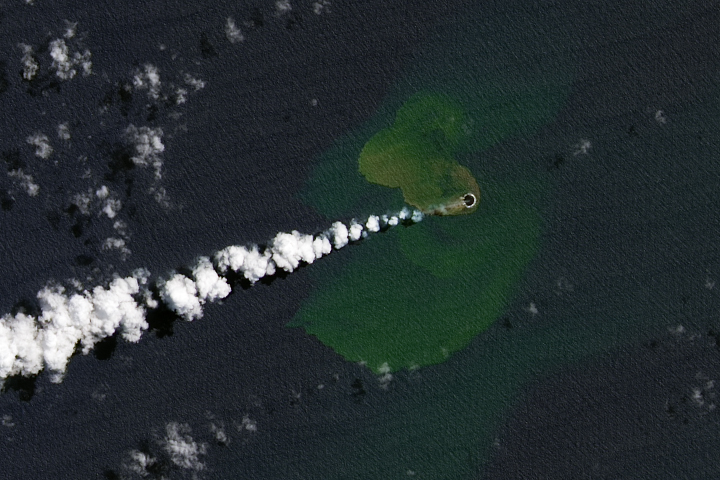