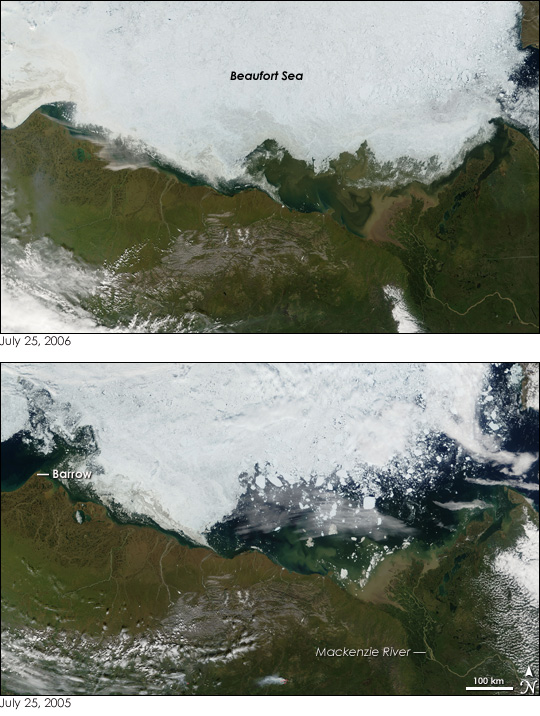 From the time Europeans discovered the North American continent to the mid-twentieth century, sailors searched for a northwest passage that would connect the Atlantic Ocean (and Europe) to the Pacific Ocean (and Asia). No such passage exists through the continent, but during the summer, a northwest route through the Arctic opens up. By sailing around Greenland, threading the islands of the Canadian Arctic, and skimming along the Canadian and Alaska northern shores, a ship traveling from Europe to East Asia can save as much as 4,000 kilometers. However, the Northwest Passage is not a viable shipping route most of the year. During the winter, thick sea ice builds up, blocking the passage of all ships. Even during the summer, when the sea ice has melted or thinned, icebreakers must often accompany ships through the passage.

The challenges of navigating the Northwest Passage are evident in these photo-like images of the Beaufort Sea north of Alaska and Canada’s Yukon and Northwest Territories. Though the passage is often clear by the end of July, as it was in 2005 (lower image), the sea was still frozen almost to the shore by July 25, 2006 (top). Very little of the inky, blue-black sea is visible under the white expanse of ice. The ice is not smooth; rather, chunks can be seen where new ice has formed around pieces of older ice from previous years. The section of the Beaufort Sea that is visible in the top image is clouded with brown sediment flowing into the water from the Mackenzie River.

There are several reasons for the lingering ice, says Walt Meier of the National Snow and Ice Data Center. First, temperatures in the sea dropped below average in the fall of 2005 and remained cool in the Beaufort Sea region, so sea ice was able to form quickly. Record melting during 2005 allowed old, thick ice from the north to drift into the Beaufort Sea. Some of this old ice may still be in the sea, frozen among the fresh ice that formed over the winter. Finally, wind may be pushing yet more ice toward the shore.

Though there was more ice in the Beaufort Sea at the end of July 2006 than there had been in previous years, the Arctic as a whole continued to melt at an ever-quickening pace. By June 2006, sea ice in the Arctic covered 1.2 million fewer square kilometers than the long-term average measured between 1979 and 2000, said Meier. This put sea ice concentrations (the percentage of ice that covers a predefined area) at a record low for June, breaking the record set in June 2005, during which sea ice extent was down 0.8 million square kilometers from the average.

The Moderate Resolution Imaging Spectroradiometer (MODIS) on NASA’s Terra satellite captured these images on July 25, 2006, and July 25, 2005. The large images provide above are at MODIS’ maximum resolution of 250 meters per pixel. Both the 2005 and 2006 images are available in additional resolutions from the MODIS Rapid Response Team.