Fires Across the Central Siberian Plateau 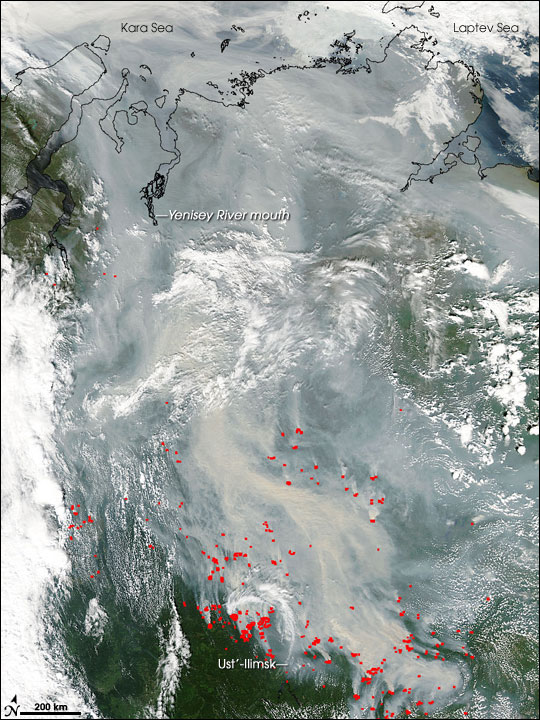 Forest fires were burning across a broad swath of the Central Siberian Plateau on July 24, 2006, when the Moderate Resolution Imaging Spectroradiometer (MODIS) on NASA’s Aqua satellite passed overhead and captured this image. Places where the sensor detected actively burning fires are marked in red. A shroud of smoke spreads over thousands of square kilometers of Russia. In the center of the image, the smoke has a brownish tinge. The city of Ust’-Ilimsk, normally visible as a tan spot along the Angara River, is completely hidden by smoke.

The scene spans the plateau from Russia’s Irkutsk region in the south to the Arctic Ocean in the north. Lake Baikal would be just outside the lower right corner of the scene. This comparison might be helpful in understanding the scale of the event: if the above image covered the United States, the scene would stretch from California to the New Mexico-Texas state line, and it would reach more than a hundred miles both north and south of the borders of the United States.

The high-resolution image provided above has a spatial resolution of 500 meters per pixel. The MODIS Rapid Response System provides this image at additional resolutions. Related images for this event can be viewed in the Natural Hazards: Fires section of the Earth Observatory Website.

Forest fires were burning across a broad swath of the Central Siberian Plateau on July 24, 2006, when the Aqua satellite passed overhead.

North of Lake Baikal in south-central Russia, scores of fires were burning in the area's forests in mid-July 2006.