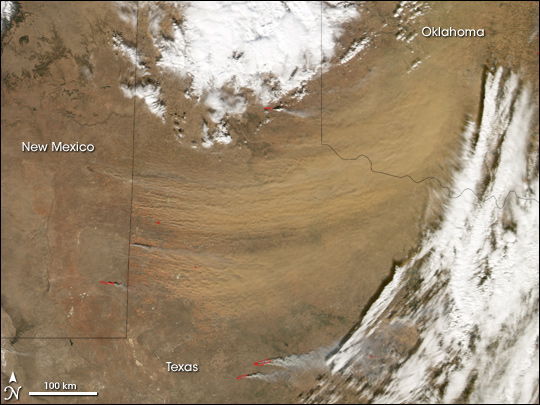 The same hot, dry, windy conditions that allowed grassfires to rage throughout parts of Oklahoma and Texas at the end of 2005 kicked up dust at the beginning of the new year. On January 1, 2006, a dust storm approximately 500 kilometers (300 miles) across swept through northern Texas and into Oklahoma.

The Moderate Resolution Imaging Spectroradiometer (MODIS) flying onboard the Aqua satellite captured this image on January 1, 2006. Swirling in a counter-clockwise direction toward the northeast, the dust storm appears in a light shade of tan, partially obscuring the view of the darker ground surface. The storm appears to start near the Texas-New Mexico border. Smoke from wildfires mixes with the dust in places. The “hot spots” where these fires rage on the ground appear in red, and some of the fires emit substantial plumes of smoke, especially two fires immediately south of the dust storm. Another fire, almost hidden by clouds, burns north of the dust storm.

The hot, dry, windy conditions that prevailed in this part of North America in late 2005 set the stage for a dust storm in a couple different ways. Winds stir up particles on the ground and eventually suspend them in the air. Once aloft, dust particles can remain airborne even after wind speeds drop. Meanwhile, a dearth of rain can decrease vegetation cover, leading to extreme daytime heating of the ground. This heat causes an unstable boundary layer, the lowest 1 to 2 kilometers (0.6 to 1.2 miles) of atmosphere. An unstable boundary layer often encourages air to rise, carrying dust even higher into the air.

According to the U.S. Drought Monitor at the University of Nebraska-Lincoln, significant portions of Texas faced drought conditions in late December 2005, including areas of extreme drought along the border with Mexico, and exceptional drought along the border with Oklahoma and Arkansas. Under these conditions, fires and dust storms could continue to threaten the region.