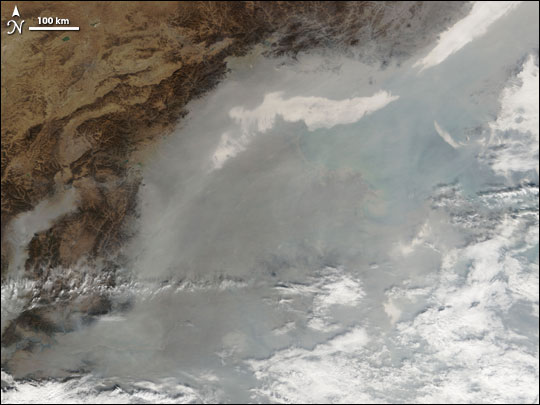 Thick pollution obscured the sky over Beijing and nearby regions on November 4, 2005. According to news reports, the city’s pollution index reached the highest level on the scale between November 4-5, and residents were warned to spend as little time as possible outdoors. Children, elderly, and those with respiratory conditions were cautioned to be especially careful.

The Moderate Resolution Imaging Spectroradiometer (MODIS) flying onboard the Terra satellite captured this image on November 4 as pollutants lingered over the area. In this image, a nearly opaque band of gray smog obscures the view of Beijing and the region to the south. Whiter clouds lie over the smog in the lower portion of the scene, while nearer to the top center of the scene, the haze appears to be hovering above a strip of fog. The rugged mountains that encircle the eastern coastal plain appear to be hemming in the haze, which spreads out in tendrils into the folds of the mountains to the north and west.

Various weather conditions can contribute to a pile-up of pollution, including high pressure, high humidity, and large pools of cold air settling near the Earth's surface. Most of the time, atmospheric temperature decreases as altitude increases, and warmer air near the surface rises upward, mixing pollution away. Occasionally, the atmosphere’s temperature profile can become inverted, with cold air near the surface and warm air higher up. The cold air is less buoyant, and pollution doesn't disperse. One or more of these meteorological conditions may have played a role in the poor air quality over Beijing at the end of the first week of November.

As China industrializes at a record pace, air pollution problems, including acid rain and premature deaths due to respiratory and cardiovascular problems, will continue to be a challenge for the country. According to an article published on October 30, 2005, on NYT.com, acid rain affects 33 percent of China’s citizens. And the scientific journal Nature published an article in June 2005 indicating that perhaps as many as 75 percent of China’s city dwellers live below the country’s acceptable air-quality standard. Second only to the United States in the production of greenhouse gases, China could surpass the United States in the near future as its coal-powered economy continues to grow.