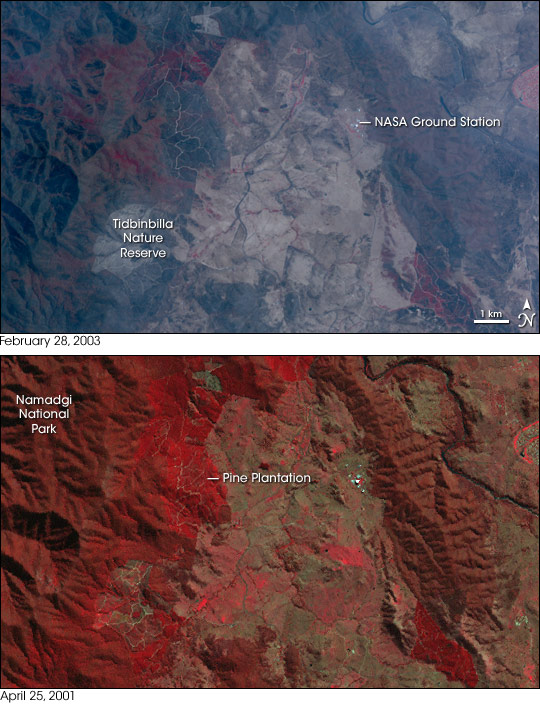 In January 2003, a “dry” thunderstorm brought lightning and wind—and fire—to mountainous areas of southeastern Australia, including New South Wales, Victoria, and the Australian Capital Territory. As January progressed, the weather became extremely windy and hot. The individual fires eventually coalesced into a single, massive blaze that charred 70 percent of Australian Capital Territory and even invaded the Canberra urban area.

This pair of satellite images shows the region before the fires (bottom) and after (top). The images have been enhanced with infrared observations to clearly show healthy vegetation (red), naturally bare or sparsely vegetated soil (tan), and burned areas (charcoal). Nearly all of the forested hills of the Namadgi National Park have been blackened. The logging roads crisscrossing the mountainside where a pine plantation previously stood contrast sharply with the ash-colored terrain.

Among the few (perhaps only) good things that resulted from these blazes is the discovery of what may turn out to be one of the oldest and most significant sites for Aboriginal cultural and archeological artifacts in Australia. The site was discovered north of the Tidbinbilla Nature Reserve after the pine plantation burned so fiercely that all trees along with several inches of soil completely burned. The terrible fire and subsequent erosion exposed artifacts and the remains of rock shelters that had been hidden.

The bright white circles that appear to the east of the pine plantation across the valley are satellite dishes at the NASA Deep Space Network ground station nestled up to the base of the mountains. Communication with several satellites, including Voyager, was interrupted for several hours while personnel responded to the approaching blazes. Luckily, no dishes were damaged. 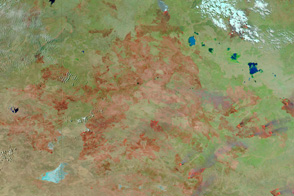 Much of Australia’s Northern Territory is charred in this image from September 30 after fires burned an area roughly the size of England in 2011.