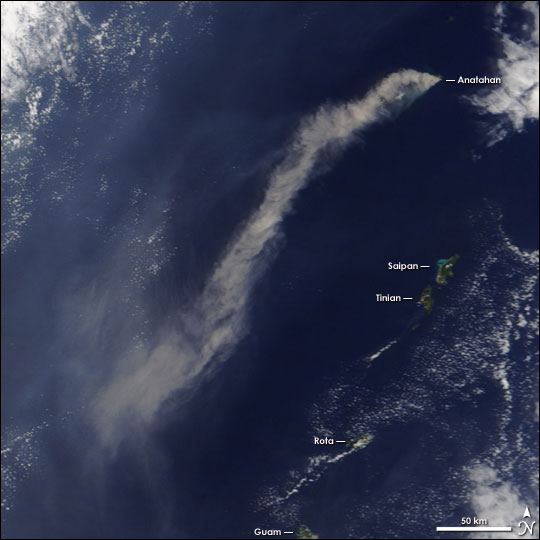 A thick cloud of ash erupts from the Anatahan Volcano in this Moderate Resolution Imaging Spectroradiometer (MODIS) image collected on April 5, 2005. According to the Washington Volcanic Ash Advisory Center, a series of low-level eruptions starting on April 4 have created this plume.

The same processes that fueled this eruption created Anatahan and the other islands in the Northern Mariana Islands. The arc of islands frames the eastern edge of the Philippine plate, a large section of the Earth’s crust that floats on a layer of softer rock. To the east of the Marianas, the slab of crust that carries the Pacific Ocean crashes against the Philippine Plate. In the clash, the colder, denser Pacific Plate sinks beneath the Philippine Plate, forming the Mariana Trench, a deep gorge that plunges to a depth of 10,920 meters (35,827 feet), the deepest known point in any ocean. Plummeting deep into the Earth, the Pacific Plate crumbles, and the pressure heats some of the breaking rock. The hot rock forces its way back to the surface through weak points in the overriding Philippine Plate, creating the arc of volcanoes that make up the Northern Mariana Islands. Among the 14 small islands in the Northern Mariana Islands, there are 12 major volcanoes, including Anatahan.

When geologists explored Anatahan in 1990, layers of rock on the volcano pointed to explosive eruptions with fast-moving ash and rock, though the volcano had shown no signs of life for centuries. The volcano’s first recorded eruption occurred on May 30, 2003. It erupted for a second time between April and June 2004, and commenced its third recorded eruption in January 2005.