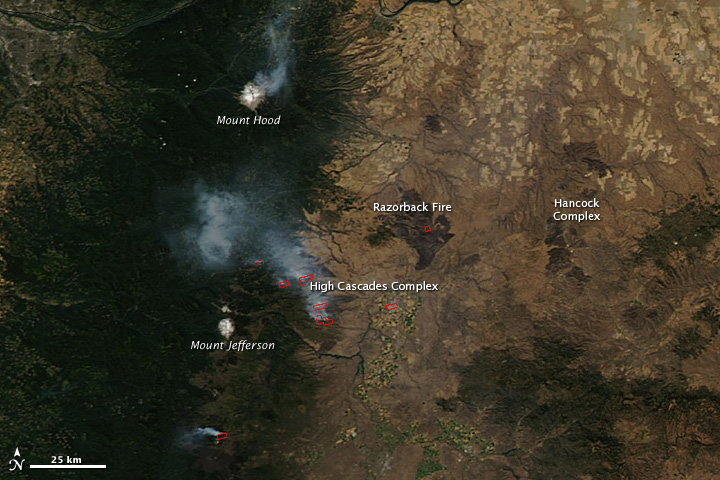 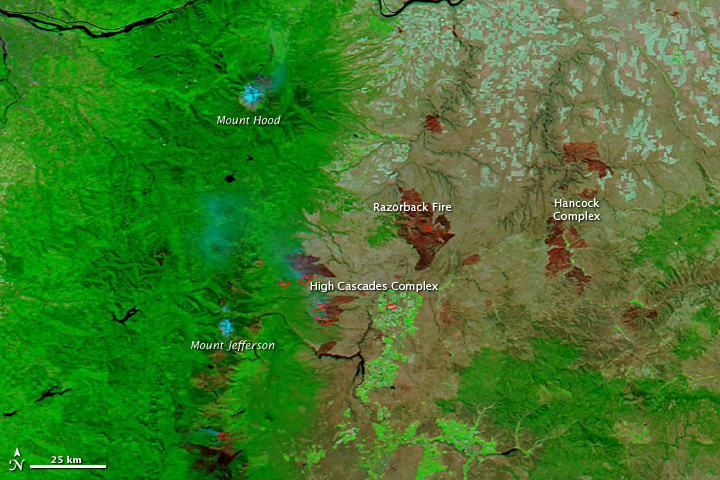 A lightning storm started this cluster of wildfires in the Cascade Mountains of Oregon on August 24, 2011. Burning through forest, grass, and brush, the fires had covered 90,436 acres as of September 1. They are 25 percent contained.

The Moderate Resolution Imaging Spectroradiometer (MODIS) on NASA’s Aqua satellite acquired these images on September 1. The fires, collectively called the High Cascades Complex are outlined in red. The top image shows the region in natural color, similar to what the human eye sees. In this image, smoke hangs over the Cascade Mountains. Newly burned land is dark brown, similar in tone to the natural land cover in the desert east of the dark green mountains.

The lower image combines infrared and visible light in a false color image that reveals the extent of the recently burned area. Here, freshly burned land is red, while plant-covered land is green, and bare or sparsely vegetated land is tan. In this scene, the Razorback and Hancock Complex fires are more obvious. The Razorback Fire is the largest fire in the High Cascades Complex, having burned 51,943 acres as of September 1. The Hancock Complex burned 57,597 acres of grass and is entirely contained. All of the fires started in the same lightning storm on August 24.

Taken on September 9, this image shows the extent of the High Cascades Complex fire burning in northern Oregon. 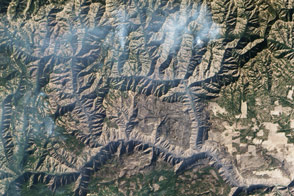 Lightning-triggered fires have charred thousands of acres near the border between Oregon and Washington.