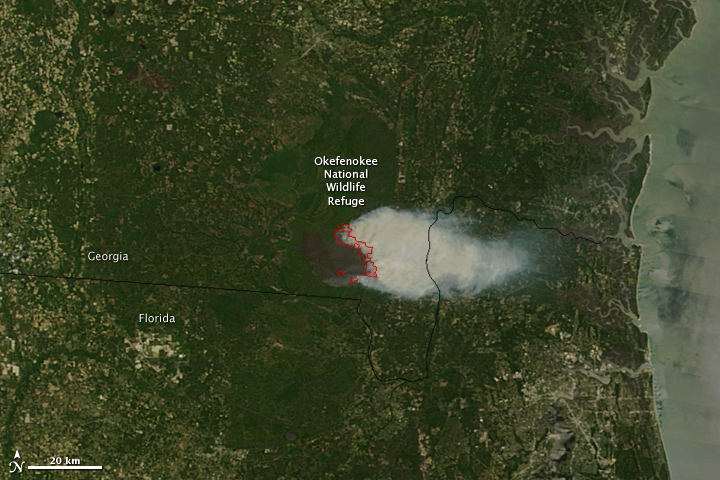 Lightning ignited the Honey Prairie Fire in the Okefenokee Swamp on April 28, 2011. When the Moderate Resolution Imaging Spectroradiometer (MODIS) on NASA’s Terra satellite acquired this image on May 8, the fire had grown to 61,822 acres. The active fire areas are outlined in red, and the newly burned area west of the fire front is dark brown.

Even without a border, the boundaries of the Okefenokee Swamp are easy to see in the image. The Okefenokee National Wildlife Refuge, established in 1936 to preserve the Okefenokee Swamp, is solid green in contrast to the more fragmented landscape around it. Covering some 402,000 acres, the refuge contains cyprus forests, marsh, and prairie.

Fire is a natural part of the ecosystem. It clears woody brush, allows prairie grasses to grow, and restores longleaf pine habitat. Because of its role in the ecosystem, fire managers with the Okefenokee National Wildlife Refuge and the Georgia Forestry Commission are allowing the fire to burn within the refuge’s boundaries. Drought is making plants in the swamp more prone to fire this year. 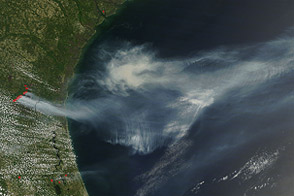