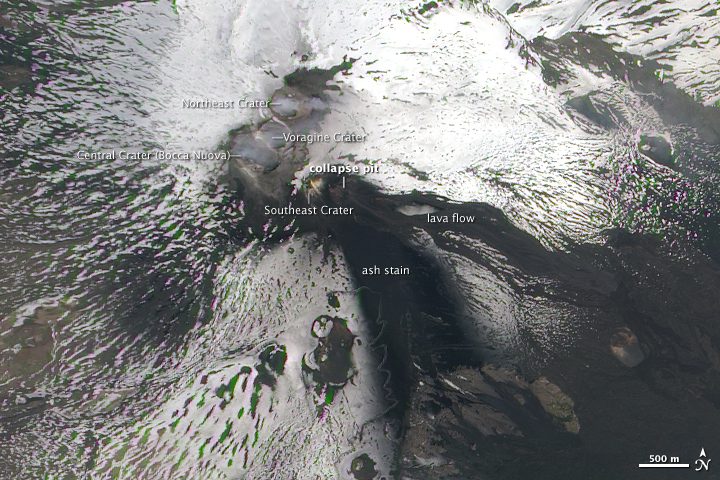 On April 10, Italy’s Mount Etna unleashed a sudden and violent eruption (called a paroxysmal episode,) for the third time in 2011. According to the Instituto Nazionale de Geofisica e Vulcanologie (INGV; National Institute of Geology and Volcanology), this episode included lava fountaining, a new lava flow from the collapse pit in the Southeast Crater, and ash and gas emissions. Wind carried the plume of ash to the southeast. Lava flowed down the side of the mountain, exploding at times as it struck snow on the side of the volcano. The episode was not particularly long-lived, however, and by evening much of the activity had subsided.

The Advanced Land Imager (ALI) on NASA’s Earth Observing-1 (EO-1) satellite captured this natural-color image of Etna on April 13, 2011. By this time, activity was quite mild, but the volcano’s recent activity was evident. The ash plume settled on the snow, painting a dark curved arc from the collapse pit down the slopes. The three-kilometer lava flow and the associated pyroclastic flows run eastward from the pit and through the snowfields.

Mount Etna has one of the world’s longest documented history of eruptive activity, with historical references to its eruptions going back 3,500 years. More or less continuous activity comes from the complex of summit craters. The Southeast Crater is a fairly recent addition to the summit, forming in 1978. Lava has flowed down the mountainside in almost every direction at some point in modern times.