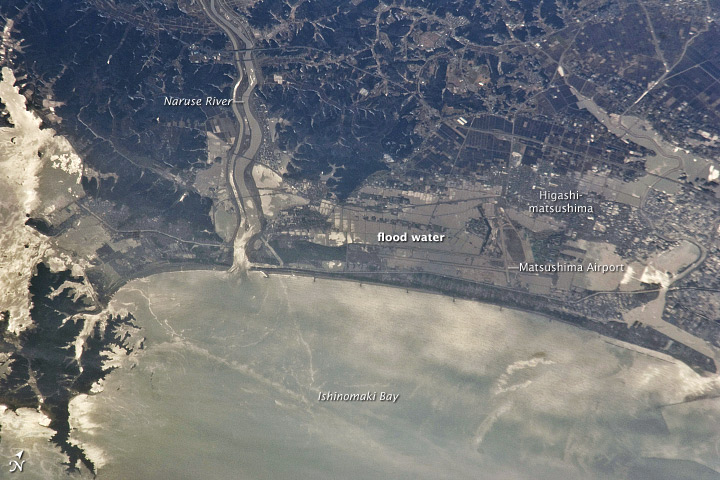 On March 13, 2011, flood waters lingered along the Japanese coast north and east of Sendai in the aftermath of a magnitude 9.0 earthquake. An astronaut on the International Space Station took this photograph of Higashimatsushima from an altitude of 220 miles (350 kilometers). Both agricultural fields and settled areas are submerged by muddy water, while the crisscrossing runways at Matsushima Airport are surrounded. (A false-color satellite image from March 14 date shows an overlapping area.)

The March 11 earthquake caused severe damage to oil refineries, some of which caught fire. In the aftermath, oil floated on the surface of Ishinomaki Bay. In this photo, sunglint—the mirror-like reflection of the Sun on the ocean's surface—highlights the oil slicks; oil smoothes the surface and makes the water more reflective. In this image, patches of oil tend to appear lighter than oil-free areas. Other phenomena, however, can lighten the water’s appearance, especially close to the shore.

Astronaut photograph ISS026-E-33647 was acquired on March 13, 2011, with a Nikon D2Xs digital camera using a 800 mm lens, and is provided by the ISS Crew Earth Observations experiment and Image Science & Analysis Laboratory, Johnson Space Center. The image was taken by the Expedition 26 crew. The image in this article has been cropped and enhanced to improve contrast. Lens artifacts have been removed. The International Space Station Program supports the laboratory as part of the ISS National Lab to help astronauts take pictures of Earth that will be of the greatest value to scientists and the public, and to make those images freely available on the Internet. Additional images taken by astronauts and cosmonauts can be viewed at the NASA/JSC Gateway to Astronaut Photography of Earth. Caption by Michon Scott based on image interpretation by Susan K. Runco, NASA-JSC.