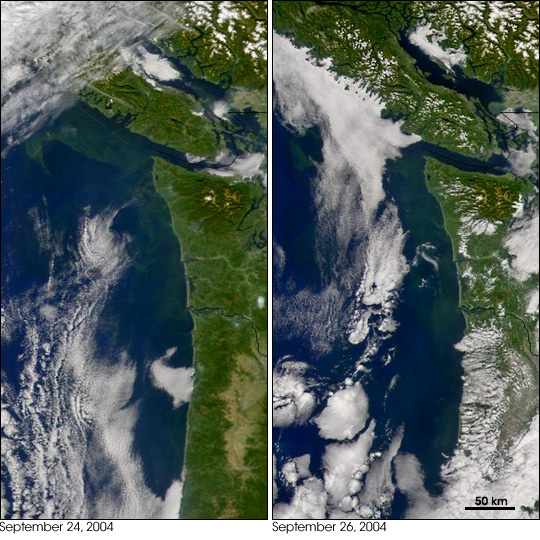 Scientists from the ECOHAB Pacific Northwest Project report that a toxic bloom of algae has appeared in the eastern Pacific, located about 24 km (15 miles) off the northwest coast of Washington. Situated in the region known as the Juan de Fuca eddy, the bloom spans a large area roughly 48 km (30 miles) across. Scientists report finding concentrations of Pseudo-nitzschia as high as 13 million cells per liter of sea water. Such a bloom is considered unusually intense and potentially lethal for humans.

Pseudo-nitzschia can release domoic acid, which has been found to accumulate in the tissue of certain shellfish. If ingested by humans, domoic acid will attack tissue in the brain that humans use for memory and learning. There is some concern that if a major storm passes through it could push the bloom eastward into near-shore waters.

Harmful algal blooms have been reported with increasing numbers and intensity in recent years, typically forming just outside the Strait of Juan de Fuca. This strait links Puget Sound to the Pacific Ocean. Scientists believe this year's bloom is being fed by nutrients upwelled from near the ocean bottom as well as nutrients swept off the land into the sea from Vancouver and Washington.

Scientists from various agencies and universities established a 5-year research initiative to study the physiology, toxicology and oceanography of toxic Pseudo-nitzschia species off the Pacific Northwest Coast. Called ECOHAB Pacific Northwest, this interdisciplinary team of scientists is closely monitoring the current situation. The team is comprised of researchers from NOAA, the University of Washington, University of Western Ontario, Canada, University of Maine, San Francisco State University, and the Department of Fisheries and Oceans, Canada. One ECOHAB official reports that, as of October 12, 2004, while there has been a small rise in cell numbers in Twin Harbors, no rising level of toxins in razor clams has yet been found there.

The true-color images above show the region affected on September 24 and 26, 2004. The scenes were acquired by the Sea-viewing Wide Field-of-view Sensor aboard the OrbView-2 satellite. Note the greenish swirls in the water, in contrast to its usual dark blue color. It is impossible to say, using satellite imagery alone, which of the bloom shown in these images is Pseudo-nitzschia and which is harmless phytoplankton, but such imagery can help scientists monitor current patterns and see which way the bloom may spread over time.