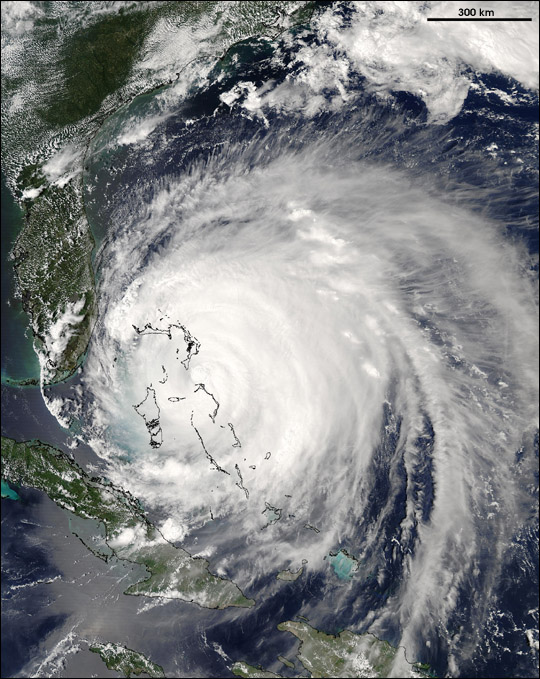 The MODIS instrument aboard NASA’s Aqua satellite captured this true-color image of Hurricane Frances on September 3, 2004, at 2:24 p.m. EDT (18:24 UTC). At the time this image was acquired, Frances was wreaking havoc in the Bahamas with sustained winds of 185 kilometers per hour (115 mph) and a storm surge between 1.8 to 4.3 meters (6 to 14 feet) on the west side of Eleuthera Island. Classified as a Category 3 storm, Frances was moving towards the west-northwest at 14 kilometers per hour (9 mph) and was expected to reach the Florida coast in approximately 24 hours.

According to news reports, Frances has hurricane-force winds that extend more than 140 km (85 miles) out from its center, with tropical storm force winds extending 295 km (185 miles). This is roughly twice the size of Hurricane Charley, which caused considerable damage to Florida almost 3 weeks ago. Although Hurricane Frances weakened substantially from the Category 4 storm it was 48 hours before this image was acquired, weather forecasters warn that it could regain some of its strength before it makes landfall. They are predicting that after it leaves the Bahamas, the storm will make landfall again somewhere along Florida’s lower east coast. Because Frances is such a slow-moving storm, there is concern that high rainfall amounts will add to the damage that will be caused by high winds and storm surge flooding.

The high-resolution image available here is 500 meters per pixel. Additional resolutions are also available on the MODIS Rapid Response System.