Fires in Louisiana and Arkansas 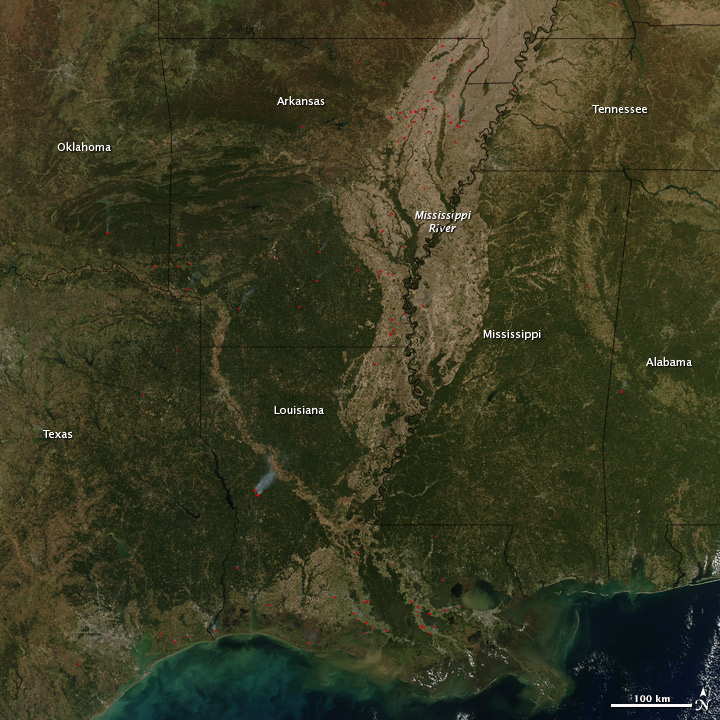 October 30, 2010, proved to be a clear, sunny day in the southern United States, giving the Moderate Resolution Imaging Spectroradiometer (MODIS) on NASA’s Aqua satellite this cloud-free view of the ground. The sensor detected several fires (marked in red) burning in Louisiana and Arkansas, particularly along the Mississippi River plain. Both Louisiana and Arkansas are in drought.

In Louisiana, all man-made fires have been banned since October 2. The Louisiana Department of Agriculture and Forestry reported that more than 483 wildfires had burned 6,000 acres in the dry conditions between October 1 and October 29.

Several counties in Arkansas also instituted a ban on fires, including many of the counties in the Mississippi River alluvial plain, the tan area on either side of the river. MODIS detected dozens of fires in the floodplain, the majority of which are likely wildfires.

The large image is the highest-resolution version of the image, but the image is available in additional resolutions from the MODIS Rapid Response Team.

Dozens of fires burn in this cloud-free view of Louisiana and Arkansas, taken on October 30, 2010.

Fires in the Southern U.S.