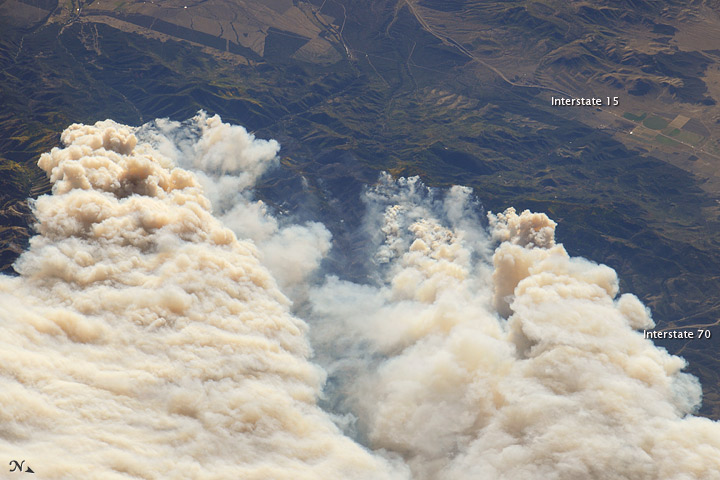 The Twitchell Canyon Fire, near central Utah’s Fishlake National Forest, was reported to cover approximately 13,383 hectares (134 square kilometers, or 33,071 acres) as of September 21, 2010. The crew on the International Space Station (ISS) took this photograph of the smoke plumes generated by fires close to the southwestern edge of the burned area. The fire was started by a lightning strike on July 20, 2010.

The photograph is highly oblique; that is, it was taken at an angle rather than looking straight down towards the Earth’s surface (a nadir view). The ISS was located over a point approximately 509 kilometers (316 miles) to the northeast, near the Colorado/Wyoming border, at the time. Southwesterly winds stretched smoke plumes to the northeast.

While the Twitchell Canyon region is sparsely populated, Interstate Highway 15 is visible at the upper right. A MODIS image acquired a day earlier than the astronaut photograph provides a regional view of the fire.

Astronaut photograph ISS024-E-15121 was acquired on September 20, 2010, with a Nikon D3X digital camera using an effective 1000 mm lens, and is provided by the ISS Crew Earth Observations experiment and Image Science & Analysis Laboratory, Johnson Space Center. The image was taken by the Expedition 24 crew. The image in this article has been cropped and enhanced to improve contrast. Lens artifacts have been removed. The International Space Station Program supports the laboratory as part of the ISS National Lab to help astronauts take pictures of Earth that will be of the greatest value to scientists and the public, and to make those images freely available on the Internet. Additional images taken by astronauts and cosmonauts can be viewed at the NASA/JSC Gateway to Astronaut Photography of Earth. Caption by William L. Stefanov, NASA-JSC.

This astronaut photograph shows smoke billowing from the Twitchell Canyon Fire in central Utah on September 21, 2010. 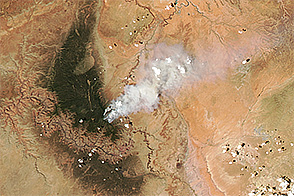