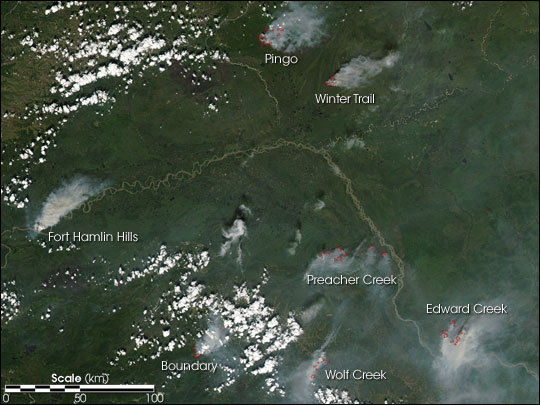 Numerous forest fires were burning in the Yukon Flats region of east-central Alaska in mid-June 2004. The fires are burning in the wake of an incredibly active week of lightning, with a record-breaking, single-day total of 8,500 strikes on June 14, followed by another 6,200 strikes the next day (according to local news reports). This image from the Moderate Resolution Imaging Spectroradiometer (MODIS) on the Aqua satellite shows some of the largest, most rapidly growing fires on June 20. Areas where MODIS detected fires are outlined in red.

The two northernmost fires in the scene, the Pingo and Winter Trail Fires, are the largest of several lightning-caused fires that are being collectively called the Solstice Complex. The Pingo was estimated to be 20,350 acres as of June 20, and the Winter Trail was 11,040. The other fires pictured here are not part of the complex: Preacher Creek—20,000 acres; Edward Creek—5,300 acres; Fort Hamlin Hills—3,300 acres; Boundary—4,000 acres; and Wolf Creek—5,200.