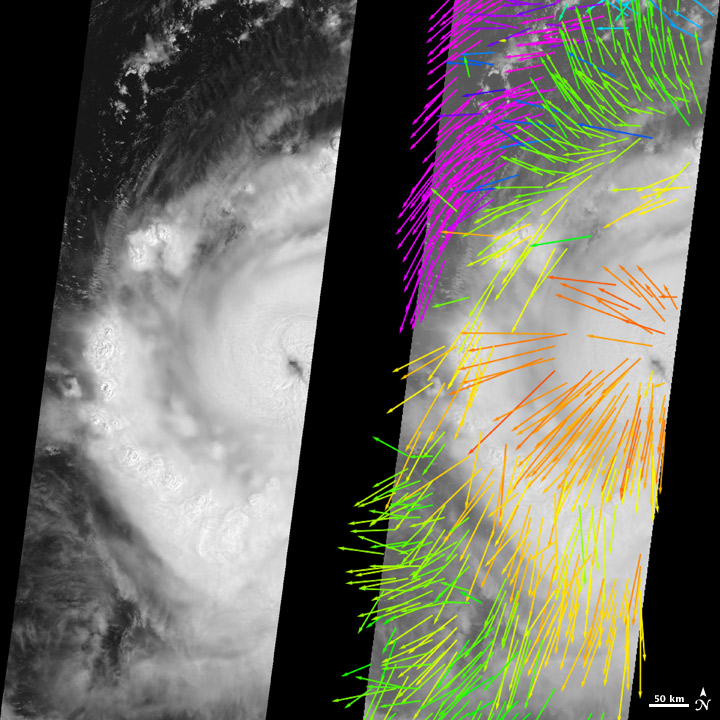 The Multi-angle Imaging SpectroRadiometer (MISR) on NASA’s Terra spacecraft captured these images revealing the wind field in the western half of Hurricane Earl at 11 a.m. EDT on August 30, 2010, when it was a category 3 storm on the Saffir-Simpson scale. The hurricane's eye is just visible on the right edge of the MISR image swath.

The lengths of the arrows indicate wind speeds, and their orientation shows wind direction. The altitude of a given wind vector is shown in color. Low clouds, less than 4 kilometers (2.5 miles) in altitude (shown in purple), follow the cyclonic (counter-clockwise) flow of air into the hurricane. This warm, moist air is the power source for the hurricane.

Mid- and high-level clouds (green and yellow-orange, respectively) move in an anti-cyclonic (clockwise) direction as they flow out from the top of the storm. The very highest clouds, with altitudes around 17 kilometers (10.6 miles), are flowing directly away from the eye of the hurricane.

Winds at various altitudes were obtained by processing the data from five of MISR's nine cameras to produce the display shown on the right. The image (left panel) extends approximately 1,110 kilometers (690 miles) in the north-south direction and 380 kilometers (236 miles) in the east-west direction.

The MISR instrument on NASA's Terra spacecraft captured this image of the wind field inside Hurricane Earl at 11 a.m. EDT on August 30, 2010, when it was a category 3 storm. 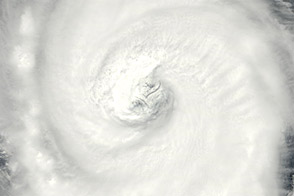