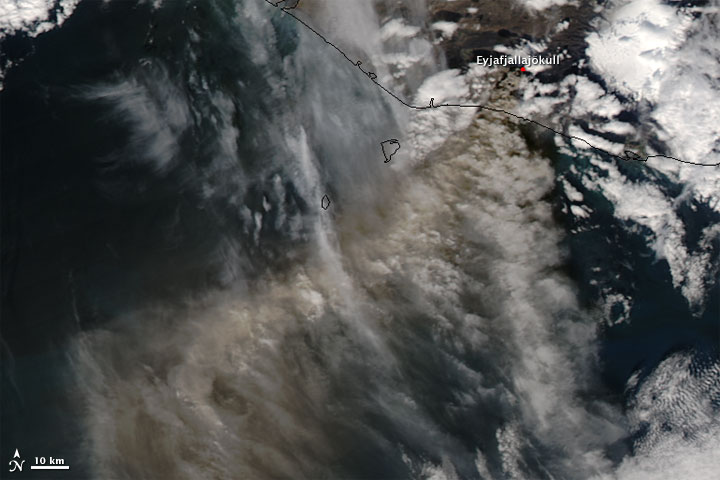 Volcanic ash blew from the summit of Eyjafjallajökull Volcano toward the southwest and south in mid-May 2010. The Moderate Resolution Imaging Spectroradiometer (MODIS) on NASA’s Aqua satellite captured this natural-color image on May 15, 2010. Volcanic ash appears in shades of brown and gray, mingling with paler clouds off Iceland’s coast. The red dot is a hotspot indicating high surface temperatures associated with volcanic activity. Black outlines indicate the coasts of Iceland and smaller islands nearby.

The same day that MODIS acquired this image, the Iceland Meteorological Office reported that Eyjafjallajökull’s plume fairly consistently reached a height of 6 to 7 kilometers (21,000 to 24,000 feet), and occasionally reached a height of 8 kilometers (27,000 feet). The ash blew toward the southwest and later toward the south. Besides ash emissions, lightning strikes and an earthquake swarm were recorded at the volcano in the 24 hours prior to the May 15 bulletin. The Iceland Meteorological Office warned that the volcano showed no signs of stopping its eruptive activity in the near future.

Eyjafjallajökull (or Eyjafjöll) is a stratovolcano composed to alternating layers of hardened lava, solidified ash, and rocks thrown out by previous eruptions. It reaches a height of 1,666 meters (5,466 feet). A period of eruptive activity beginning in late March 2010 caused major disruptions to air traffic, closing airspace over multiple European countries for several days.

Acquired on May 15, 2010, this natural-color image shows a brown and gray plume blowing off the coast of Iceland from Eyjafjallajökull Volcano.