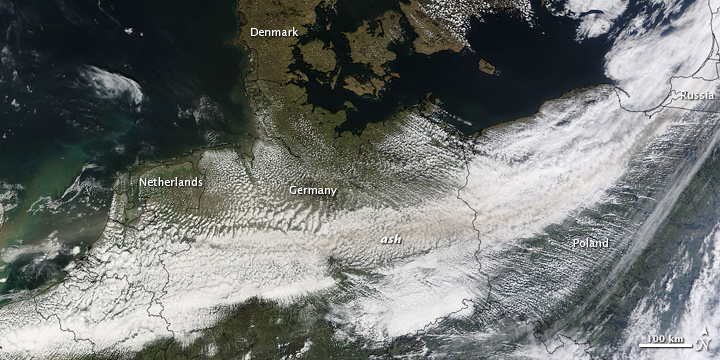 Ash from Iceland’s erupting Eyjafjallajökull Volcano had drifted over northern Europe by April 16, 2010. The brown ash is mixed with clouds in this photo-like image taken by the Moderate Resolution Imaging Spectroradiometer (MODIS) on NASA’s Terra satellite at 12:45 p.m. local time (GMT +2). The visible ash sweeps in an arc across the Netherlands, Germany, Poland, and Russia. It is likely that the clouds mask additional ash.

Eyjafjallajökull began its eruption on March 20, 2010, after 187 years of quiet. On April 14, the volcano began a more forceful eruption, emitting plumes of ash. As of April 16, the eruption was still ongoing, with ash reaching heights of four to five kilometers, said the Icelandic Met Office. The volcano’s previous eruption lasted just over a year between December 1821 and January 1823.

The large image is the highest-resolution version of the image available. The image is available in additional resolutions from the MODIS Rapid Response System, which also provides daily images of Iceland.

Eyjafjallajökull Volcano erupted a thick plume of ash on May 11, 2010.