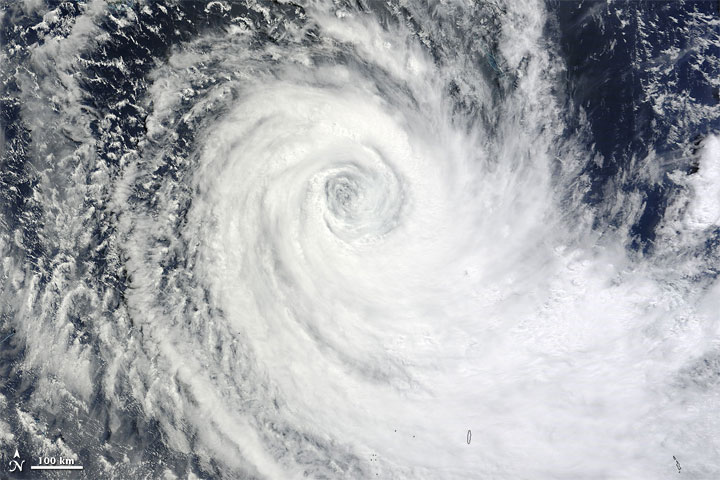 Tropical Cyclone Ului persisted south of the Solomon Islands on March 18, 2010. A bulletin from the U.S. Navy’s Joint Typhoon Warning Center (JTWC) issued the same day reported that the cyclone had maximum sustained winds of 80 knots (150 kilometers per hour) and gusts up to 100 knots (185 kilometers per hour). Although still strong, the wind speeds had significantly diminished over the previous few days.

The Moderate Resolution Imaging Spectroradiometer (MODIS) on NASA’s Terra satellite captured this true-color image of the storm on March 18, 2010. North of the storm lie the Solomon Islands (shown in the high-resolution image). Southeast of the storm is New Caledonia. Ului’s eye appears to span 100 kilometers (60 miles), and the whole storm spans several hundred kilometers.

As of 15:00 UTC on March 18 (2:00 a.m. on March 19 in Sydney, Australia), Ului was roughly 670 nautical miles (1,240 kilometers) east of Cairns, Australia. The JTWC reported that Ului had been moving southward and was expected to turn west and accelerate toward Australia. The JTWC forecast that Ului would make landfall over the northeastern Queensland coast and diminish over land.