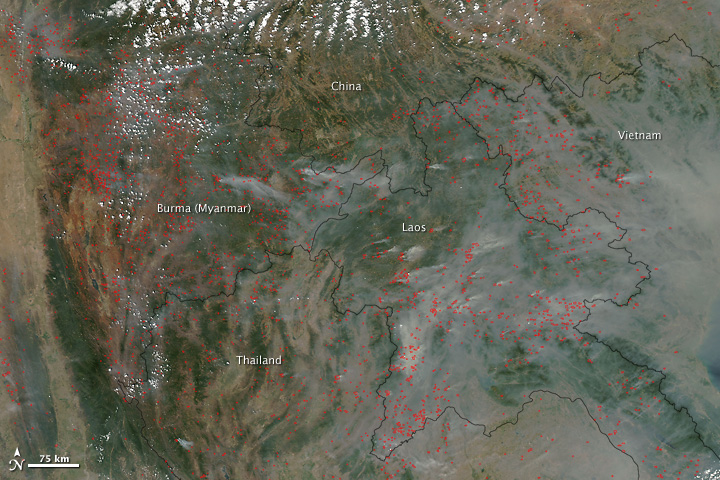 The skies over Burma (Myanmar), Thailand, Laos, and Vietnam were extremely smoky on March 5, 2010, when the Moderate Resolution Imaging Spectroradiometer (MODIS) on NASA’s Aqua satellite passed overhead and captured this image. Hundreds of active fires were detected by the sensor; locations are outlined in red.

Many of the fires, particularly in the permanently cultivated lowland areas, are not particularly smoky. This is often a sign that the fires are burning only small amounts of vegetation, such as crop residue or dry grass in pasture. Other fires are generating thick smoke plumes which spread east. These may be accidental fires that spread from agricultural areas into forest areas, or they may be intentional forest-clearing fires.

Widespread fires are a common occurrence in Southeast Asia during the late dry season, and while they are not necessarily immediately hazardous, they can have a significant impact on regional air quality and public health, greenhouse gas emissions, and natural resources.

Hundreds of fires in Burma, Thailand, Laos, and Vietnam were creating smoky skies on March 5, 2010.