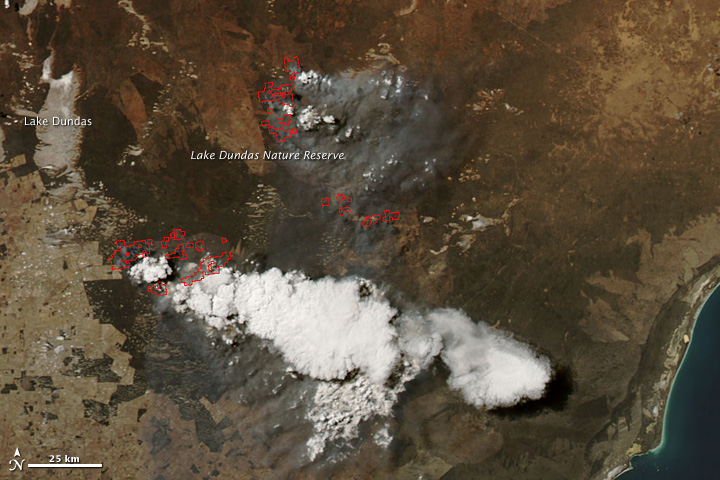 Several large bushfires were burning in southern Western Australia on February 18, 2010 (local time). According to alerts issued by the Fire and Emergency Services Authority of Western Australia (FESA), the fires were large and producing thick smoke that was affecting visibility on local roads. For the most part, however, they were not threatening communities or private property.

This view of the fires was captured by the Moderate Resolution Imaging Spectroradiometer (MODIS) on NASA’s Aqua satellite. Places where MODIS detected actively burning fires are outlined in red.

In the Lake Dundas Nature Reserve, FESA reported that the fire had burned about 80,000 hectares (197,700 acres) as of February 18, and it was expected to continue burning for several days. A fire burning to the south of the reserve appears to enhancing cloud formation: in addition to smoke, a thick white plume billows southeast from the fire locations.

By January 24, 2006, wet weather had dampened a bushfire burning in the Darling Range Mountains south of the city of Perth in Western Australia.