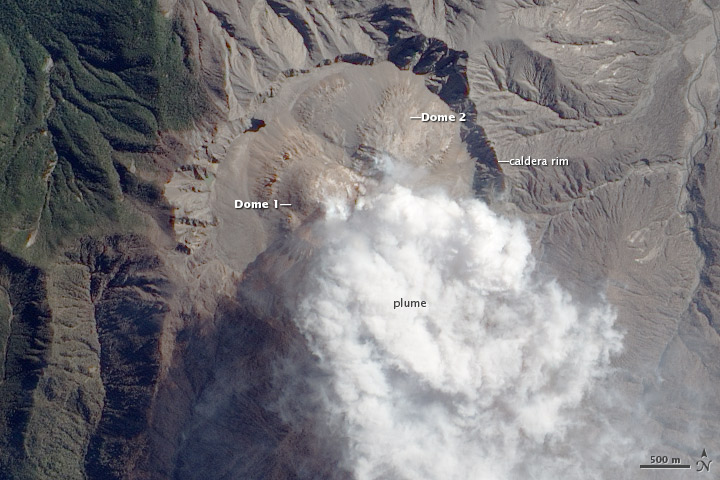 Fresh lava domes fill most of the 10,000-year old caldera of Chaitén volcano. Dome 1 began forming in May 2008, when Chaitén erupted for the first time in written history. Dome 2 began growing later, in the fall of 2008. On September 30, 2009, shifting winds were blowing the plume of ash and steam to the southeast, revealing the northern and western sides of the two domes (the southern side of Dome 1 was visible on September 27, 2009).

According to Servicio Nacional de Geología y Minería [the Chilean National Geological and Mining Service (translated by The Volcanism Blog)], the dome complex is currently growing steadily. Active lava domes are extremely unstable and dangerous. They are often steep-sided, composed of weak rocks, and prone to frequent collapses. A lava dome collapse can release one type of pyroclastic flow, a fast-moving landslide composed of extremely hot rocks, ash, and gas.

Fresh lava domes fill most of the 10,000-year old caldera of Chaitén volcano.

Chaitén volcano emitted a column of ash and steam as its dome-building eruption continued in late September 2009.