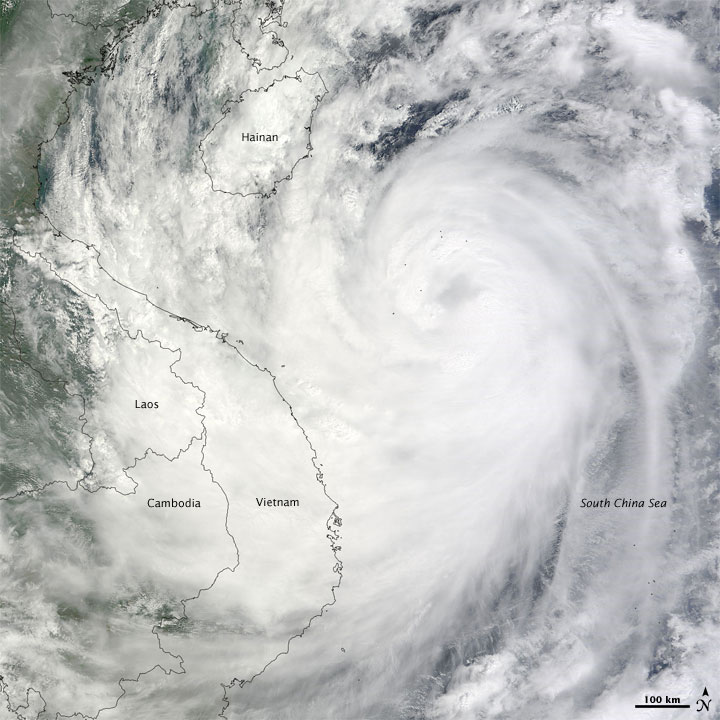 After causing devastating floods in the Philippines, Tropical Storm Ketsana (also known as Ondoy) continued its westward journey across the South China Sea, headed in the direction of Southeast Asia. The Moderate Resolution Imaging Spectroradiometer (MODIS) on NASA’s Terra satellite captured this true-color image of the storm on September 28, 2009. The eye of the storm hovers southeast of the island of Hainan. Clouds extend as far east as Cambodia and Laos.

As of September 29, 2009, one day after MODIS acquired this image, Ketsana appeared to be disintegrating. The Joint Typhoon Warning center reported that the storm was rapidly winding down and was expected to completely dissipate over land as it continued westward.

As Ketsana moved away, the destruction left behind in the Philippines became more apparent. According to a September 29 report from the BBC, the death toll in that nation stood at 246 people, and some 450,000 people had been displaced. The storm had also caused 22 deaths in Vietnam.