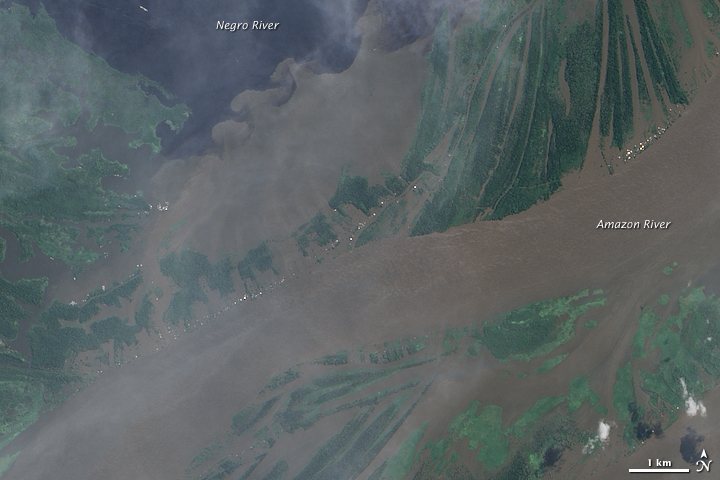 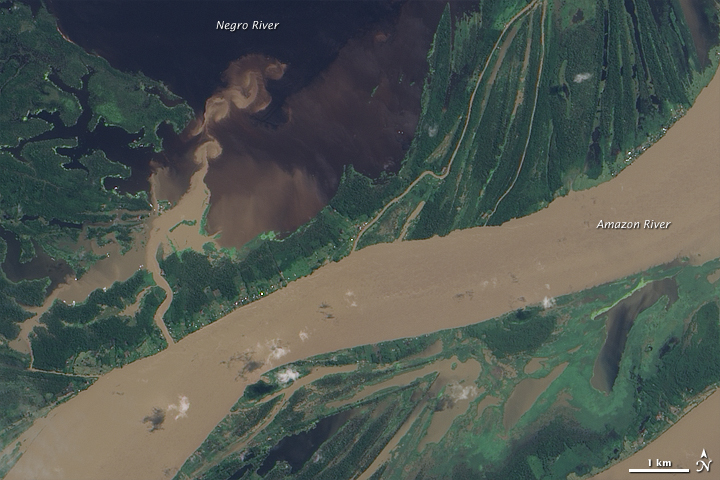 The Amazon basin floods spectacularly every year. The rise and fall of water is an integral part of the unique rainforest ecosystem. But not every flood is the same. In mid-June 2009, water levels on the Negro River in Manaus, Brazil, reached their highest in 56 years, reported the AFP news service. Opposite the city of Manaus, the Amazon and Negro Rivers flow together. By June 29, when the Advanced Land Imager on NASA’s EO-1 satellite acquired the top image, the floods on the Negro had receded, but flooding was still evident along the Amazon immediately south of Manaus.

The lower image shows the Amazon and Negro Rivers on June 7, 2004, a year when seasonal flooding was not as extreme. Tiny white flecks along the river are buildings. The Amazon is muddy brown in contrast to the clearer, dark waters of the Negro River. The rainforest that lines the river is dark green, while cleared land is lighter in color.

In June 2009, the waters of the Amazon surrounded villages that had stood on dry land in June 2004. The water seems to seep into the cleared land, filling what had been pale green, angular shapes with murky brown water. It is quite likely that the flood actually extended across the entire land between the two rivers, but the dense forest canopy rises above the water, hiding the floods beneath. Only where the land has been cleared is the flood fully visible. The 2009 scene is slightly blurred by a thin layer of cloud.