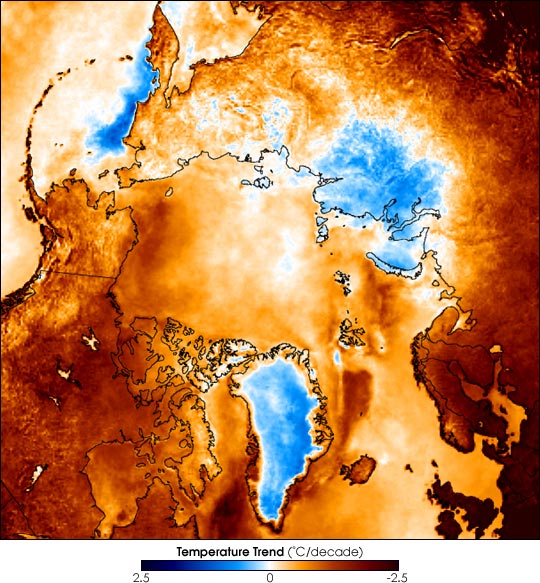 Arctic sea ice that survives the summer and remains year round—called perennial sea ice—is melting at the alarming rate of 9 percent per decade, and early findings suggest that summertime melting of Arctic sea ice in 2003 is on pace to rival last year’s low. Satellite measurements show that most of the Arctic warmed significantly in the 1990s compared to the 1980s. Such shifts in the Arctic are likely early indications of a global climate in a state of flux. (Click to read the NASA press release.)

From 1981 to 2001 some regions of the Arctic warmed faster than 2.5 degrees Celsius per decade. In this map, red colors show areas of warming, blue shows areas of cooling, and white represents little or no change. The North Pole is located in the center of this image, with North America to the lower left, Greenland bottom center, northern Europe lower right, and Asia top center and upper right.

To learn more about changing conditions in the Arctic, read Dwindling Arctic Ice.