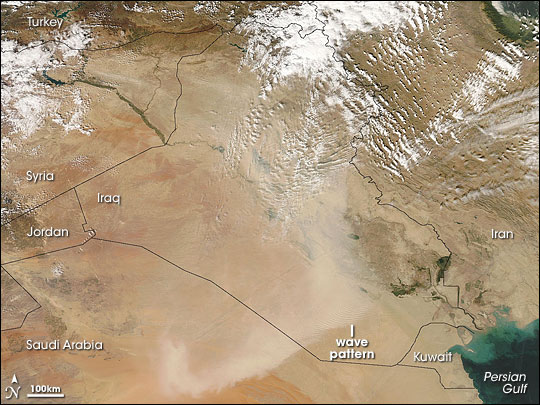 A plume of dust swept over Syria, Iraq, and Saudi Arabia on October 16, 2008, as the Moderate Resolution Imaging Spectroradiometer (MODIS) on NASA’s Aqua satellite passed overhead.

In this photo-like image, the dust appears as an arc of pale beige over a slightly darker landscape. Although the origins of this storm are not immediately obvious in this image, some plumes appear to originate in Syria. What is more obvious in this shot is that the winds pushing the dust have changed direction. At the plume’s easternmost point, in southeastern Iraq, the dust forms a wave pattern, resembling ripples on the surface of a water body.

Dust over Syria and Iraq

A dense cloud of dust entirely obscures eastern Syria and western Iraq in this photo-like image from February 22, 2010.

Acquired on the afternoon of March 3,2010, this image shows an intensified dust storm over Jordan, Syria, and Iraq. Compared to an image from earlier in the day, this image shows larger, thicker plumes and less distinct source points.