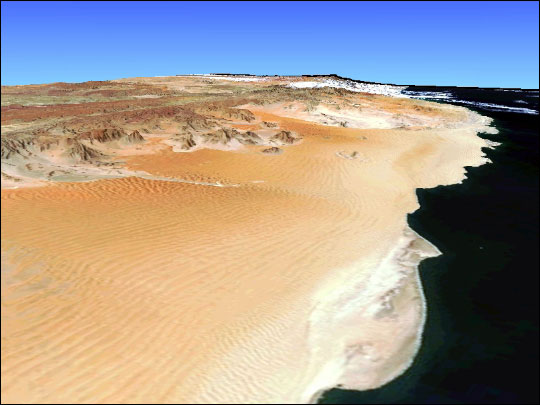 On the southwest coast of Africa, the soft orange sands of Namibia’s coastal desert rise to a rugged interior plateau, with outcroppings of colorful rocks and pale green vegetation. The large coastal desert is one of the oldest in the world, and is caused by a cool ocean current, called the Benguela Current, snaking its way up from the south along southern Africa’s Atlantic Coast. The cold current suppresses rainfall, but contributes to a morning fog that becomes trapped on the surface of some dunes and provides enough moisture for sparse vegetation to grow in some places.

The dunes, pushed up by strong onshore winds, are the highest sand dunes in the world—as high as 300 to 350 meters (1000 to 1167 feet) in places. Rows of linear sand dunes can be seen as alternating ripples of darker and lighter orange in the center of the image. The dune shapes become more chaotic surrounding the mud plain where a river runs down out of the plateau (left of center), but doesn’t make it to the ocean.

This image combines observations from the Moderate Resolution Imaging Spectroradiometer (MODIS) on June 8 and August 9, 2002, with topographic information provided by the U.S. Geological Survey’s GTOPO30 Digital Elevation Model. The vertical scale has been exaggerated to show more detail of the topography. For another look at the area, check out Astronaut Photo STS103-732-5.

Image by Frank Eckardt, Department of Environmental Science, University of Botswana, based on data from the MODIS Rapid Response Team at NASA GSFC

High Dunes in the Namib Desert