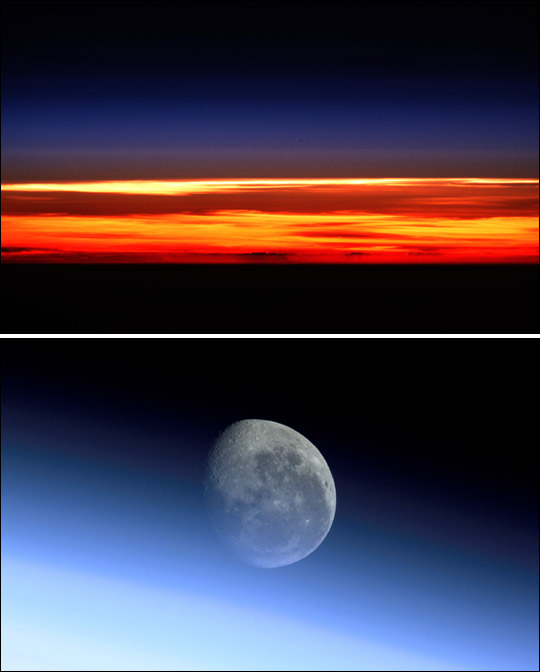 Some of the most breathtaking views of Earth taken from space are those that capture our planet’s limb. When viewed from the side, the Earth looks like a flat circle, and the atmosphere appears like a halo around it. This edge of the atmosphere is known as the limb. Viewed from satellites, space shuttles, and even the moon, the image of this luminous envelope of gases shielding the life on our planet from the dark, cold space beyond rarely fails to fascinate us.

The two images above show the Earth’s limb captured by astronauts on the International Space Station. The first is a view of the limb at sunset. The surface of the Earth appears as a dark disk at the bottom with the blackness of outer space draped over the top. Below that image is a glimpse of the barren moon through the Earth’s limb. With no atmosphere, the limb of the moon arcs crisply against the backdrop of space.

Views of the Earth’s limb are as functional as they are beautiful. The Shuttle Columbia (STS 107) carried the Shuttle Ozone Limb Sounding Experiment-2 (SOLSE-2) as a demonstration of new limb-viewing technology that will be used on the next generation of meteorological satellites to monitor ozone change. To learn more about how limb-viewing can be used to monitor ozone, read Measuring Ozone from Space Shuttle Columbia.

Images ISS001-421-24 and ISS002-E-9767 (click to order high-resolution images), were provided by the Earth Sciences and Image Analysis Laboratory at Johnson Space Center. Additional images taken by astronauts and cosmonauts can be viewed at the NASA-JSC Gateway to Astronaut Photography of Earth.