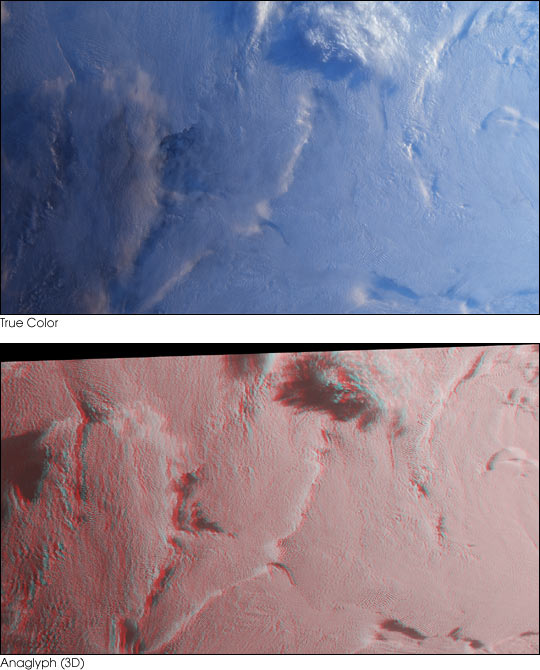 Stratus clouds are common in the Arctic during the summer months, and are important modulators of the arctic climate. This image pair from the Multi-angle Imaging SpectroRadiometer (MISR) was acquired on August 23, 2000, and shows a region of stratified clouds situated near the boundary of the permanent polar ice pack to the north of the Chukchi and East Siberian Seas. At top is a natural-color view captured by MISR’s vertical-viewing (nadir) camera. At bottom, a stereo anaglyph enables observation of multiple cloud layers.

The images are centered at about 75 degrees north latitude, near the international dateline. These high-latitude data were acquired during the “ascending node” of the Terra orbit, that is, the portion of the orbit where the spacecraft is flying from south to north. The images have been rotated 90 degrees counterclockwise to facilitate stereo viewing, thereby orienting them with south toward the left and north toward the right. Solar illumination is very oblique, and sunlight is coming from the right-hand side of the images. Viewing the anaglyph in 3D requires the use of red-blue glasses, with the red filter placed over your left eye. Information on ordering glasses can be found at: http://photojournal.jpl.nasa.gov/Help/VendorList.html#Glasses

Dark ocean waters and ice floes can be observed through several translucent clouds in the left-hand portion of the nadir image. These clouds are no longer translucent in the anaglyph image, which was created using data from MISR’s two most obliquely forward-viewing cameras. The cold, stable air causes the clouds to persist in stratified layers, and this layering is evident in the stereo view. Near the top center, a high-altitude cloud formation is illuminated by the Sun and casts long shadows on the underlying cloud deck.

The Multi-angle Imaging SpectroRadiometer observes the daylit Earth continuously and every 9 days views the entire globe between 82 degrees north and 82 degrees south latitude. The MISR Browse Image Viewer provides access to low-resolution true-color versions of these images. These images were generated from a portion of the imagery acquired during Terra orbit 3626. The data have been resampled to a resolution of 350 meters per pixel, and cover an area of about 533 kilometers x 626 kilometers. They utilize data from blocks 8 to 12 within World Reference System-2 path 176.