Eddies off the Queen Charlotte Islands 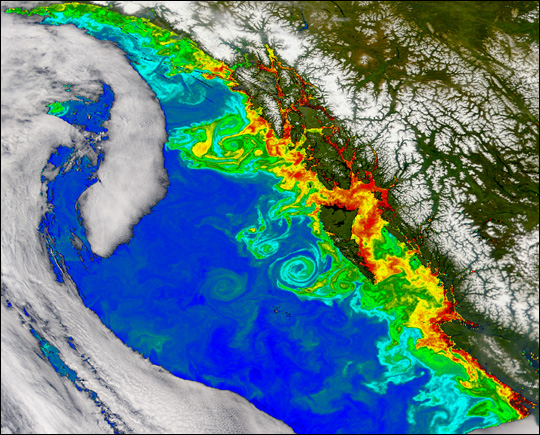 The bright red, green, and turquoise patches to the west of British Columbia’s Queen Charlotte Islands and Alaska’s Alexander Archipelago highlight the presence of biological activity in the ocean. These colors indicate high concentrations of chlorophyll, the primary pigment found in phytoplankton. Notice that there are a number of eddies visible in the Pacific Ocean in this pseudo-color scene. The eddies are formed by strong outflow currents from rivers along North America’s west coast that are rich in nutrients from the springtime snowmelt running off the mountains. This nutrient-rich water helps stimulate the phytoplankton blooms within the eddies. (For more details, read Tracking Eddies that Feed the Sea.)

To the west of the eddies in the water, another type of eddy—this one in the atmosphere—forms the clouds into the counterclockwise spiral characteristic of a low pressure system in the Northern Hemisphere. (Click on the image above to see it at full resolution; or click to see the scene in true-color.)

The snow-covered mountains of British Columbia are visible in the upper righthand corner of the image. This scene was constructed using SeaWiFS data collected on June 13, 2002.

Eddies in the Gulf of Alaska

Phytoplankton Thrive around the Falkland Islands