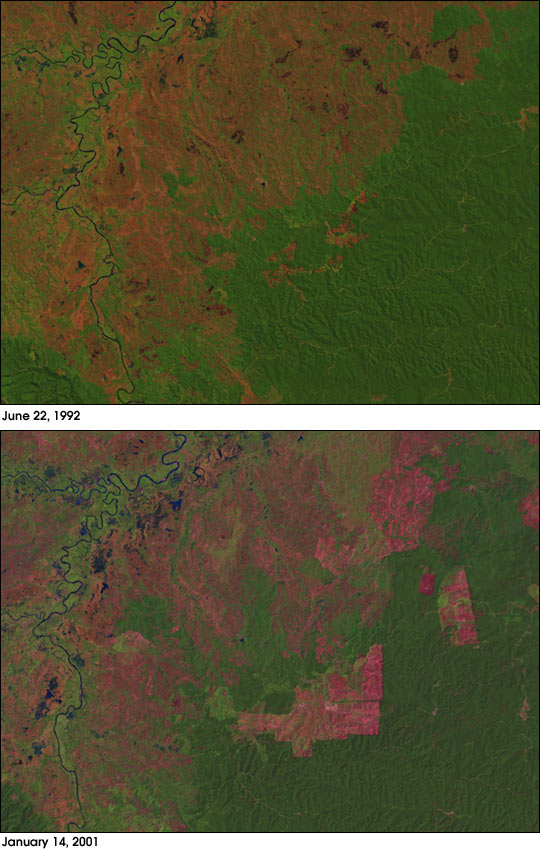 Indonesia is rapidly losing its lowland forests to logging, much of it illegal. At present, logging is claiming the forests at a rate of nearly two million hectares (slightly less than 5 million acres: roughly the same area as the state of Massachusetts) each year. At this rate, the island of Sumatra will have no more lowland forests by 2005, a fate already befallen the island of Sulawesi. Indonesia’s lowland forests are home to a wide variety of wildlife and are considered among the richest ecosystems in the world. Among the unique life forms in these forests are the Orangutan and the Sumatra Tiger. Sixteen percent of the entire world’s bird species, eleven percent of its plants, and ten percent of all mammals on Earth call these forests home. Many are found nowhere else.

In the two Landsat scenes shown above, the pattern of deforestation can be clearly discerned. Deep green in these images shows lush vegetation in the forest cover. In both scenes, deep and pale red shows areas where there is little or no vegetation, often bare ground from where forest has been completely stripped. The latter Landsat scene from 2001 not only shows extensive clear cut areas, but also new logging roads built into the remaining forest to facilitate future cutting. This lowland forest region is located on Indonesia’s largest island, Sumatra, roughly 100 km southwest of the provincial capital of Jambi.