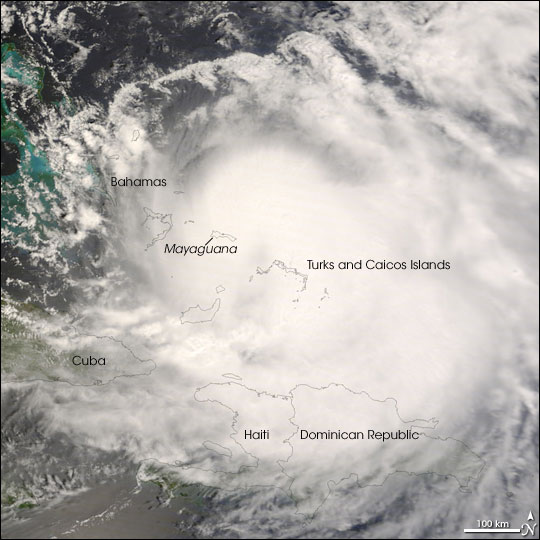 Between the National Hurricane Center’s 5:00 a.m. (Eastern Daylight Time) public advisory and the 11 a.m. advisory on August 28, 2008, Tropical Depression Eight became Tropical Storm Hanna. The storm, which formed in the Caribbean Sea northeast of the Lesser Antilles Islands, headed west-northwest, teetering back and forth between tropical storm and Category 1 hurricane strength.

This image of the storm was captured by the Moderate Resolution Imaging Spectroradiometer (MODIS) on NASA’s Terra satellite on September 1. The eye of the storm was little more than a dark depression in the Caicos Passage between the Turks and Caicos Islands and Mayaguana, the easternmost of the Bahamas Islands.

As of the 2:00 p.m. National Hurricane Center briefing on September 2, Hanna was a tropical storm, pounding the Bahamas and Hispaniola (home to Haiti and the Dominican Republic) with heavy rains. By Wednesday, the storm might re-strengthen to Category 1 hurricane status, according to NHC forecasts.

On August 28, 2008, the eighth named storm of the 2008 Atlantic hurricane season got underway in the Caribbean Sea. Hanna made landfall on the East Coast as a tropical storm on September 6.

Tropical Storm Joaquin, east of the Bahamas, strengthened into a Category 1 hurricane.