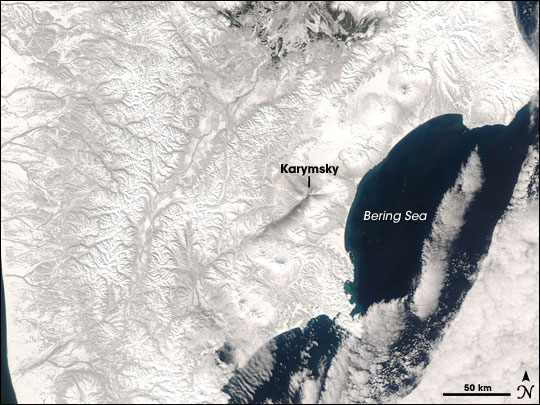 Evidence of earlier activity from the Karymsky Volcano on Russia’s Kamchatka Peninsula lingered on the landscape in late March 2008. The Moderate Resolution Imaging Spectroradiometer (MODIS) on NASA’s Aqua satellite took this picture on March 29, 2008. In this image, the pale volcanic ash stain sweeps toward the southwest—a small swath of slightly darker color on the otherwise pristine snowy white landscape.

Karymsky Volcano is a stratovolcano composed of alternating layers of hardened lava, solidified ash, and rocks ejected by previous eruptions. After some 2,300 years of quiet behavior, the volcano became active about five centuries ago.

By early March 2009, Karymsky Volcano on the Kamchatka Peninsula had stained the snowy white landscape charcoal-brown all the way to the coast.