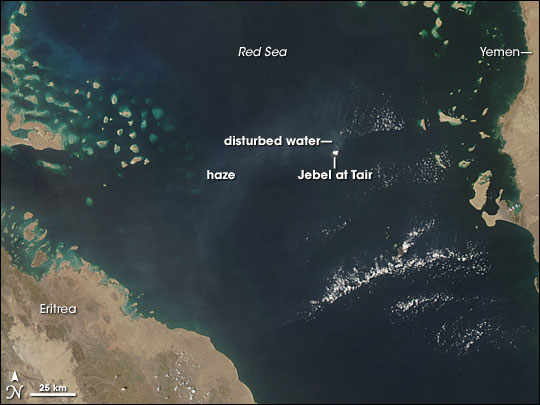 Jebel at Tair, a small volcanic island in the Red Sea, erupted late in the day on September 30, 2007, causing several casualties and leaving a number of Yemeni soldiers missing, according to news reports. A Canadian Navy spokesman, who was in the area at the time, described a “giant light show” with spewing lava and an ash cloud reaching hundreds of meters into the air.

The Moderate Resolution Imaging Spectroradiometer (MODIS) on NASA’s Aqua satellite captured this image of the diminutive volcanic island on October 1, 2007. The haze over the ocean likely results from the eruption, probably a combination of ash and vog—volcanic smog that arises from the mixture of sulfur dioxide, oxygen, and moisture. North of the island appears an area of potentially disturbed water, perhaps caused by ash in the water and/or hot lava leading to water heating and discoloration.

Midway between Yemen and Eritrea, Jebel at Tair is a stratovolcano composed of alternating layers of hardened lava, solidified ash, and rocks ejected by previous eruptions. The island is also known as Jabal al-Tair, Jabal al-Tayr, Tair Island, Al-Tair Island, and Jazirat at-Tair.

According to The Sydney Morning Herald, Yemen has maintained a military base since 1996 on this volcanic island, which is only about 3 kilometers (1.9 miles) long. Yemen’s oil minister stated that earthquakes, registering between 4 and 4.3 in magnitude struck the island on September 30 and likely triggered the eruption.