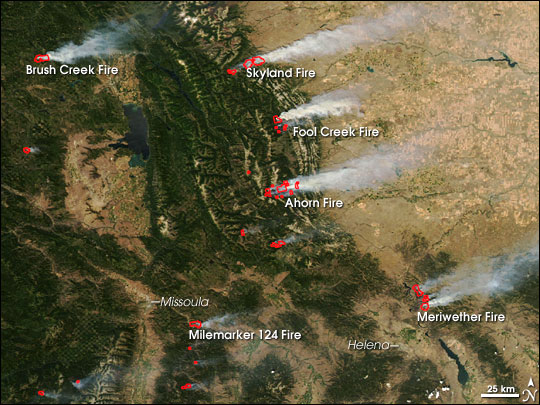 In the northern Rocky Mountains of Idaho and Montana, dozens of large, dangerous wildfires burned tens of thousands of acres in late July and early August 2007. Several communities in Montana were under evacuation on August 1, according to the daily report from the National Interagency Fire Center. Like much of the United States (with the notable exception of the southern Great Plains), the Northern Rockies of Montana and Idaho were experiencing moderate to severe drought in late July according to the weekly report from the U.S. Drought Monitor.

This image of Montana (with a little bit of Idaho included in the lower-left corner) was captured by the Moderate Resolution Imaging Spectroradiometer (MODIS) on NASA’s Aqua satellite on July 31, 2007. Locations where the sensor detected actively burning fires are outlined in red. A westerly wind appeared to have been blowing at the time of the image (2:30 p.m. Mountain Daylight Time), and plumes of smoke spread from the mountains over the state’s eastern plains. As of August 1, the Meriwether (20,745 acres) and Ahorn (36,311 acres) were the largest fires in the scene, but the Skyland Fire had grown most rapidly in the previous 24 hours; it grew by an estimated 7,505 acres to a total of 16,055 acres.

NASA’s Terra and Aqua satellites both collect fire detection data over the United States at least twice a day, once in daylight and once at night. Through a partnership between NASA’s Goddard Space Flight Center’s MODIS Rapid Response Team, the University of Maryland, and the Remote Sensing Application Center of the USDA Forest Service, the satellite observations are relayed over the Internet to the Forest Service, which maps them. The Forest Service and its partners use the MODIS fire maps to help them make strategic decisions about where firefighting resources are needed at a national level.

In the northern Rocky Mountains of Idaho and Montana, dozens of large, dangerous wildfires burned hundreds of thousands of acres in later summer 2007. Images from early September show fires were still burning.

More than a dozen large fires (some of them fire complexes that included more than one fire) were burning in Idaho and Montana on September 12, 2007. Fires have been burning in these areas since late July.