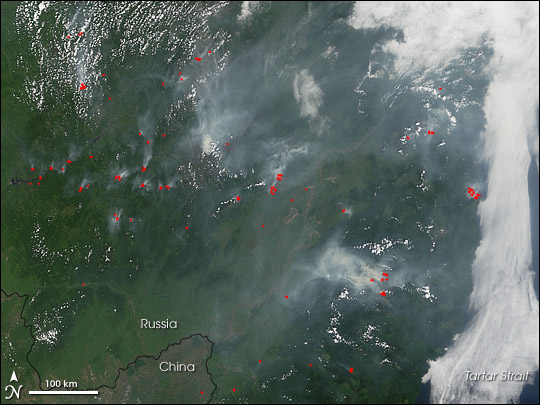 Numerous fires were burning in forests in Russia’s Far East on July 15, 2007. This image, showing the region at the border of China and Russia (the Amur River creates most of the national boundary here), has locations where the Moderate Resolution Imaging Spectroradiometer (MODIS) on NASA’s Terra satellite marked with red dots. Fires started from lightning and by people are common in Russia’s boreal forests. The fires impact not just the land surface, but the air as well. In this image, grayish smoke spreads eastward and gives clouds over the Tartar Strait a dingy look.

You can download a 250-meter-resolution KMZ file of the North Atlantic bloom suitable for use with Google Earth.