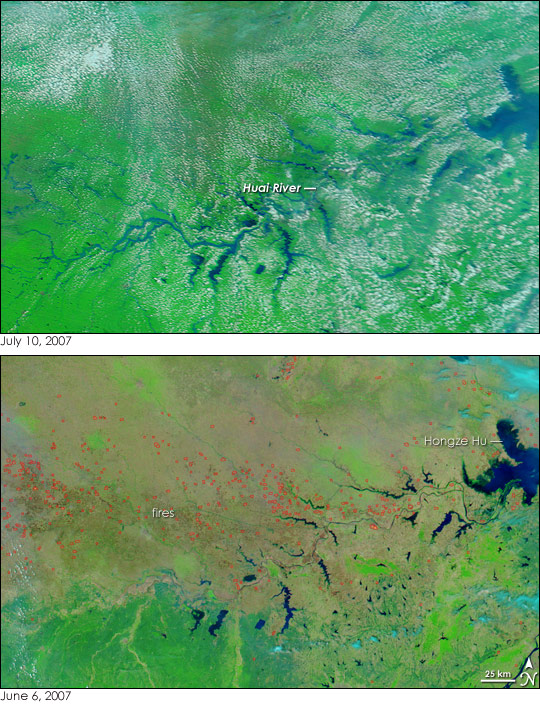 Torrential summer rains pounded the Huai River Valley of Central China starting on June 28, 2007, and by July 10, the Huai River was flowing over its banks. River levels were still rising when the Moderate Resolution Imaging Spectroradiometer (MODIS) aboard NASA’s Terra satellite captured this image on the morning of July 10. Though clouds (pale blue and white in this false-color image) and haze still hang over the river valley, the swollen waterways of the Huai and its many tributaries are still visible. With no direct outlet to the ocean, the east-flowing river is prone to flooding. The lower image, taken by Aqua MODIS on June 6, 2007, shows the river valley before the rain started. At that time, scores of fires (marked with red) burned in agricultural fields primarily north of the river. The land is charred red-brown where fires have recently burned, and bare or sparsely vegetated land is a lighter shade of pink-tan. Plant-covered land south of the river is bright green.

The tan and green speckled appearance of the land surrounding the river is typical of heavily farmed areas. The Huai River Valley is a densely populated agricultural region spread across three provinces. Flooding in these provinces (Jiangsu, Anhui, and Henan) along with flooding in the Sichuan, Hubei, Chongqing, and Shaanxi Provinces damaged 2.13 million hectares of farmland and affected about 28 million people, with nearly 800,000 forced from their homes, 26 missing, and 101 dead as of July 10, reported the Xinhua News Agency. The floods, rains, and mudslides caused the collapse of more than 75,500 houses and damaged 295,600 more homes throughout China, said Xinhua.