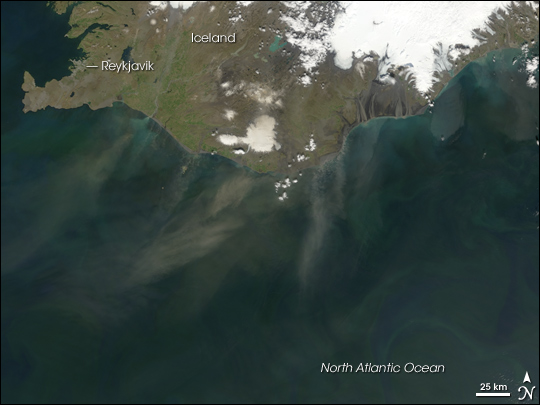 Plumes of dust blew off the southern coast of Iceland in late June 2007. The Moderate Resolution Imaging Spectroradiometer (MODIS) flying on NASA’s Terra satellite captured this image on June 23, 2007. The dust appears as grayish blurs emanating from the coast southward over the North Atlantic Ocean. Blue-green algal blooms also fringe the coastline.

Iceland’s winter of 2006-2007 brought relatively light snow, leaving the local vegetation little shelter from frost. Both the vegetation and soil dried further in two weeks of arid weather prior to this dust storm. Strong winds from the north added the final ingredient needed for dust plumes in late June.

You can download a 250-meter-resolution KMZ file of Iceland suitable for use with Google Earth.