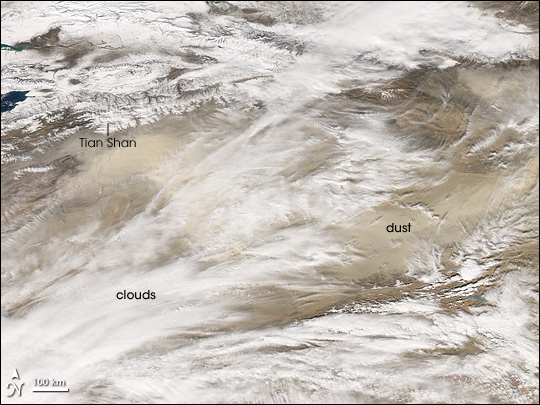 On February 28, 2007, a dust storm bearing hurricane-force winds struck China’s far west. According to CNN, the storm derailed a train, causing four casualties. The train had just left a station in Turpan when high winds first cracked windows then blew cars off the tracks.

This image shows a combination of dust and clouds over western China, captured on February 28, 2007, by the Moderate Resolution Imaging Spectroradiometer (MODIS) on NASA’s Aqua satellite. The pale tan hue characteristic of dust storms appears over the Taklimakan Desert, just south of the Tian Shan (also Tien Shan) Mountains, and also a few hundred kilometers to the east. Although cloud cover partially blocks the view, this appears to be a continuous plume of dust blowing eastward.