Dust Storm over the Mediterranean Sea 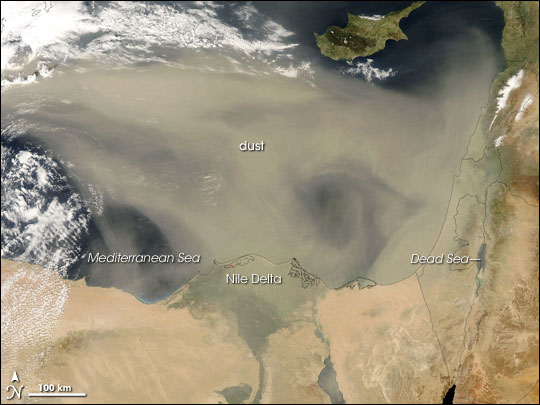 A dust storm, likely originating in the Sahara Desert, swept across the Mediterranean Sea on February 24, 2007. The Moderate Resolution Imaging Spectroradiometer (MODIS) on NASA’s Aqua satellite took this picture the same day. In this image, the dust appears as an undulating swath of tan over the dark ocean water. The storm also clouds skies over Lebanon, Israel, the West Bank, Gaza, and Egypt. Even through a layer of dust, however, the Nile Delta still sports a lush green hue, in contrast to its largely arid surroundings.

A pale plume of dust sweeps northeast from the Egyptian desert in this true-color image from November 4, 2009.