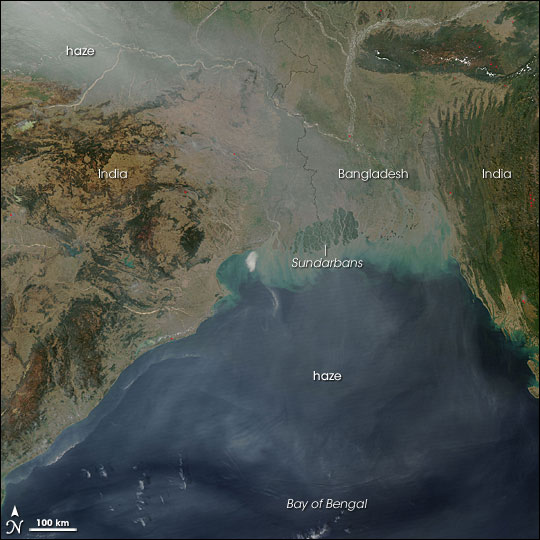 On January 27, 2007, haze sprawled from the southern edge of the Himalaya Mountains southward over the Bay of Bengal. In between, it clouded the skies over northern India and Bangladesh. In the south, thick sediment colored the Mouth of the Ganges shades of pale brown and blue-green. Such sediment is a natural occurrence, although land-use changes such as deforestation and agriculture can increase the sediment volume. The haze, mostly a mixture of urban and industrial pollution, often collects at the base of the mountains in the wintertime.

The Moderate Resolution Imaging Spectroradiometer (MODIS) on NASA’s Aqua satellite captured this image on January 27, 2007. In this image, the haze appears thickest in the northwest. It thins toward the south, but haze is still clearly visible over the ocean. The haze appears to follow a distinct path toward the ocean, concentrating over the border between India and western Bangladesh. Farther west in India, and on the east side of Bangladesh, skies appear clear. Along the coastline of India and Bangladesh, the dark green Sundarbans mangrove forests stand out from the otherwise brown landscape.

Haze hugged the Himalaya Mountains in late January 2007, while thick sediment clogged the mouth of the Ganges.

More haze hugged the Himalaya Mountains on January 21, 2007, clouding the skies over northern India, Nepal, and Bangladesh. In the south, thick sediment clogged the mouth of the Ganges.