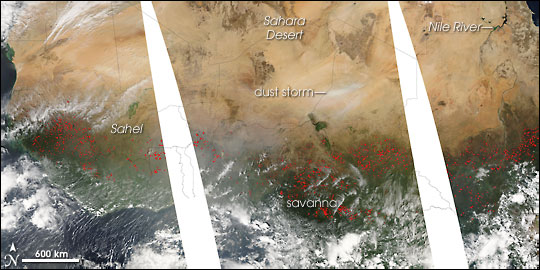 In Northern Africa, the Sahara Desert transitions into a semi-arid zone of grass and scattered shrubby vegetation known as the Sahel. Farther south, the Sahel turns into more thickly vegetated savanna. For thousands of years, African farmers and herders have set fires in these regions to manage natural resources, for example, to clear brush, to stimulate new growth of pasture grasses, or to drive game. These continent-spanning fires occur in different seasons, depending on the latitude. This image from the Moderate Resolution Imaging Spectroradiometer (MODIS) on NASA’s Aqua satellite captured on November 20, 2006, captures the northern Africa fire season fully underway. Hundreds, possible thousands, of active fires that MODIS detected are marked with red dots. The fires span countries all the way across Africa from the Atlantic Ocean (image left) to the Red Sea (upper right). Although these fires are not necessarily immediately hazardous, such large-scale burning can nevertheless have a strong impact on weather, climate, human health, and natural resources.

The spottier vegetation of the Sahel has a dull, faint brownish-green appearance, while the savannas appear darker green. The dark-colored rocks that crop up out the sands of the Sahara Desert document the region’s volcanic past. In the center of the image, a bright plume of dust whisks west-southwest from the Bodele Depression, one of the world's single largest sources of dust. Southwest of the depression, a bright green patch is vegetation growing in and around Lake Chad. The haze farther west of the lake may be a mixture of smoke and dust. This image was made from three successive overpasses of the Aqua satellite over North Africa. The white strips in the scene are the gaps between swaths.

The high-resolution image provided above has a spatial resolution of 1 kilometer per pixel. The MODIS Rapid Response System provides twice-daily images of sub-sections of North Africa in additional (higher) resolutions via a clickable map.

Each year, thousands of fires dot the Sahel and savannas of northern Africa during the agricultural burning season. These satellite images captured between November 2006 and January 2007 show widespread fires across the continent.