Fires in the U.S. Southwest 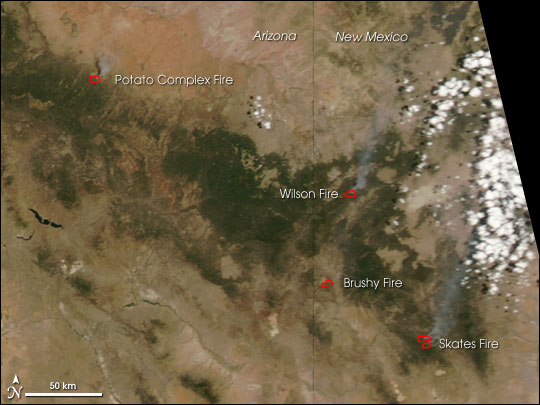 Several fires were burning in the U.S. Southwest on June 11, 2006, when the Moderate Resolution Imaging Spectroradiometer (MODIS) on NASA’s Aqua satellite passed overhead. MODIS captured this image and detected several fires (outlined in red) in Arizona (left) and New Mexico (right). In Arizona, the Potato Complex Fire was burning in ponderosa pine, pinyon juniper, and grass, and on June 12, the National Interagency Fire Center reported that the fire was threatening utility infrastructure, wildlife habitat, and cultural resources. In New Mexico, both the Skates and the Wilson Fires were started by lightning, and were being managed to protect private property and benefit the ecology of the landscape. No detail was available about the Brushy Fire at the time of this posting.