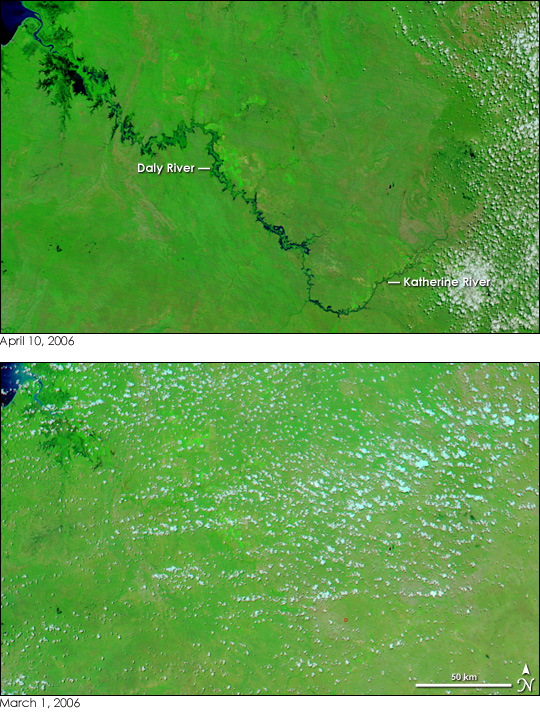 Floods swept across Australia’s Northern Territory as the six-month rainy season drew to a close in April 2006. Worst-affected was the city of Katherine, where water from an overflowing Katherine River reached up to the roofs of houses in some areas, reported the Australian Broadcast Corporation (ABC). The floods around Katherine had largely subsided when the Moderate Resolution Imaging Spectroradiometer (MODIS) on NASA’s Terra satellite acquired the top image on April 10, 2006, but the nearby Daly River was still swollen. Though not visible in this image, the city of Katherine sits along the Katherine River near the point where the label meets the river. The only clear signs of human habitation are brilliant green squares created by agriculture along both rivers.

In addition to farm fields, large pools of flood water, inky black in this image, also line the banks of the Daly River. According to ABC News, the river was still rising on April 10, and those who lived in the town of Daly River near the river’s mouth, were preparing to evacuate. The lower image, from March 1, 2006, shows the river basin earlier in the rainy season before the floods set in. To track the floods, see the MODIS Rapid Response Web site, where daily images of Australia are available.