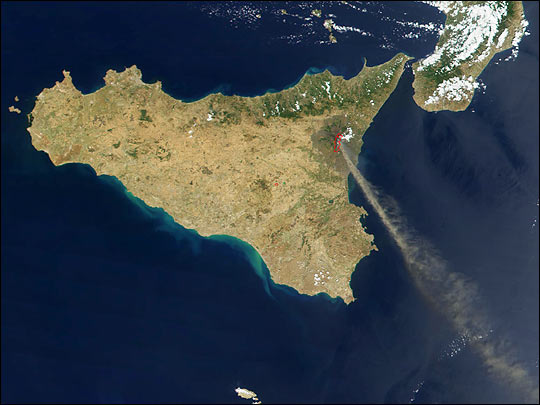 In northeastern Sicily, Mt. Etna continues to erupt. NASA’s Moderate-resolution Imaging Spectroradiometer (MODIS) on the Terra satellite captured this true-color image of the volcano on July 22, 2001. (MODIS captured a more recent image of Mt. Etna on July 24, 2001.) The eruption has opened five vents in the mountain, and is releasing a cloud of ash that can be seen stretching southeastward over the Mediterranean Sea. The red box overlaid on Mt. Etna shows where MODIS detected heat escaping from the volcano.

Mt. Etna has a complex and asymmetrical shape because it did not grow from a single large cone, but rather as a series of volcanic openings that were created and then collapsed on themselves over time. Today the mountain is dotted with hundreds of minor pyroclastic cones, built from the debris of previous eruptions, as well as numerous eruptive cones and large fissures, or cracks.

The current eruption includes an explosive fissure along the south flank of the mountain, and lava is creeping its way toward the town of Nicolosi. Local citizens have a long history of living with the volcano, and continue to farm on its flanks and in its shadow despite the volcanic and seismic danger because of the favorable climate and fertile soils. In the past, they have used earthen barriers to direct lava flows away from some towns, even going so far as to detonate explosions in the hopes of creating new channels through which the lava could flow.