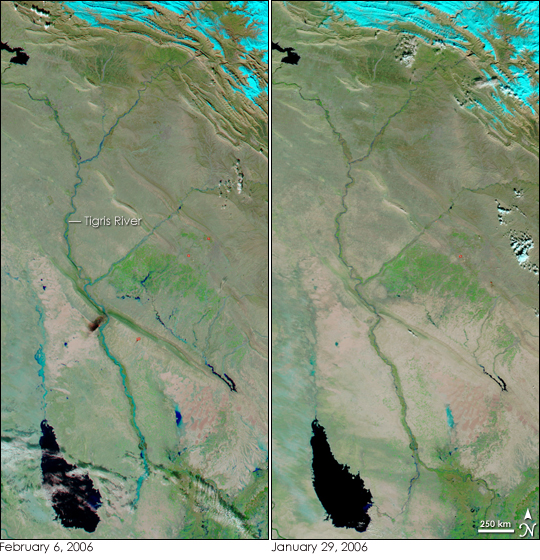 The Tigris River and its tributaries were running high on February 6, 2006, when the Moderate Resolution Imaging Spectroradiometer (MODIS) on NASA’s Aqua satellite captured the left image. Heavy rain and melting snow caused floods throughout northern Iraq, and most of the excess water flowed into the Tigris. According to the International Federation of Red Cross and Red Crescent Societies, more than 7,000 families were forced from their homes by the floods.

These images show northern Iraq in false color to highlight the presence of water. Clear water is black, while sediment-laden water is blue. Along the tops of the images, snow caps the mountains. The snow, which is bright blue here, melted off all but the peaks of the mountains between January 29, when the right image was taken, and February 6. Clouds are white and pale blue. Tiny red marks in both images indicate where MODIS detected a spot that was significantly hotter than its surroundings. Most of the time, these “hot spots” are fires, but in this case, they may be gas flares from oil wells. The dark smudge in the crook of the river below the center of the February 6 image is probably smoke from an oil fire.

Floods are a normal part of life along the Tigris River in the late winter and early spring. Though the floods are destructive, they also enrich the soil, making possible some of the earliest settlements in Western Civilization. To track the floods of 2006 as they move down the Tigris River, see the daily MODIS images provided by the MODIS Rapid Response Team.