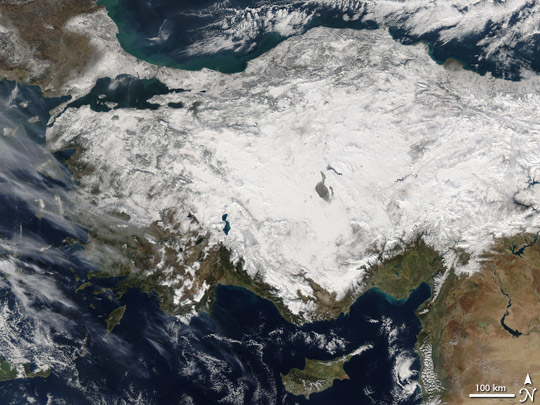 The Moderate Resolution Imaging Spectroradiometer (MODIS) on NASA’s Aqua satellite captured this usual view of Turkey nearly completely covered in snow on January 29, 2006. The Mediterranean nation usually enjoys mild, wet winters, with snow confined to the mountainous interior, but January 2006 brought unusual weather to much of Asia and Europe. A strong jet stream channeled Arctic air south, leaving Europe and Asia in a deep freeze. The cold air also meant that any moisture that fell came in the form of snow. According to news reports, the snow caused havoc on roads throughout Turkey.

The large image provided above is at MODIS’ maximum resolution of 250 meters per pixel. The image is available in additional resolutions from the MODIS Rapid Response Team.

An Arctic freeze brought cold weather and snow to Turkey in late January 2006.