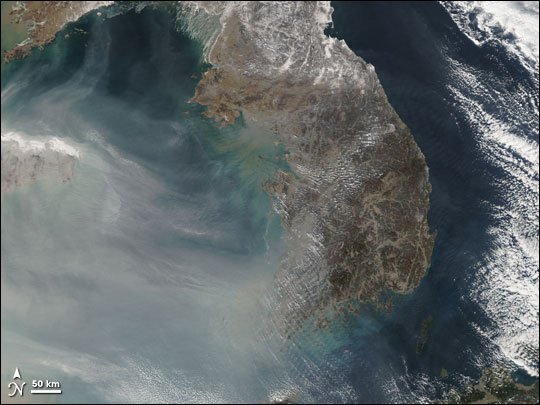 Skies over China have darkened in the past five decades, thanks to a nine-fold increase fossil-fuel emissions. In January 2006, Yun Qian and collaborators reported this finding in Geophysical Research Letters. According to the Associated Press, Qian stated that pollution absorbs and reflects sunlight, allowing less of it to reach China’s urban areas.

The Moderate Resolution Imaging Spectroradiometer (MODIS) flying onboard the Aqua satellite captured this image on January 27, 2006. In this image, a thick plume of smog makes its way across the Yellow Sea towards Korea. To the east, cloud cover can be discerned by its bright white appearance, compared to the pollution’s dingy gray.