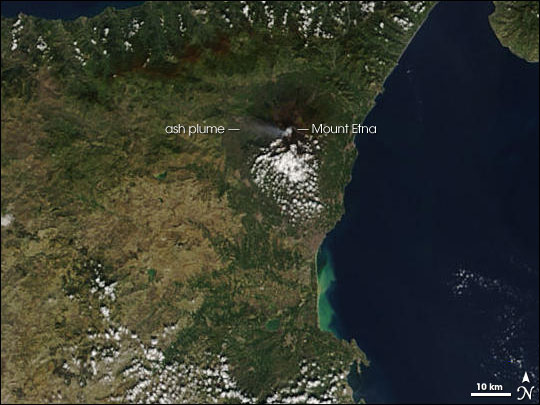 On October 28, 2005, the Moderate Resolution Imaging Spectroradiometer (MODIS) flying onboard the Terra satellite captured this image as the volcano emitted a faint plume of volcanic ash that blew westward away from the summit. Seismic activity in the area continued in the following days. On October 31, 2005, Agenzia Giornalistica Italia reported that 15 tremors had been recorded near Mount Etna by the morning of October 30, followed by 20 more shocks over the next day. The largest tremor registered a 3.9 on the Richter scale. No property damage had yet been observed.

Compared to earlier activity, the eruption observed by MODIS on October 28 was fairly mild. The most common activity at Etna includes explosive eruptions with minor lava flows, and flank vents that open from cracks down the summit. Historical records of Etna’s activity date back to 1500 BC. An eruption in 1169 resulted in 15,000 deaths; five centuries later, another eruption resulted in 20,000 deaths. During the Middle Ages and Renaissance, Etna’s clear dangers left many scholars content to rely on the observations of ancient authors rather than risk roasting in a close look for themselves. A notable exception was the German Jesuit polymath Athanasius Kircher, who witnessed one of Etna’s violent eruptions in 1630. Kircher had himself lowered into the volcanic cone for an inspection, and later published an engraving of the volcano in his two-volume work, Mundus Subterraneus. Though it covered pseudoscientific topics like dragons and astrology, Mundus Subterraneus was possibly the first printed work on volcanoes and geophysics. 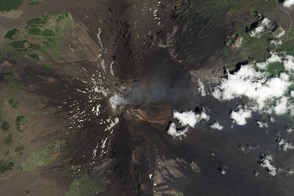